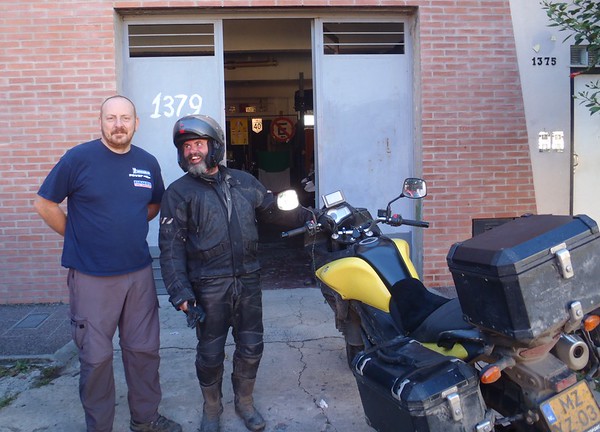 After a late and eventual night I needed to get the bike to the airport by 10.30am and the traffic here is pretty horrendous so left at about 9.30am with clear instructions from Sandra on the route and the process I needed to follow to get Daisy back home. Its only about 35km to the airport so I had given myself an hour but as I pulled onto the ring road wall to wall traffic and as mentioned before on this blog with my panniers on it is very difficult to split traffic and I was also a little bit nervous and I did want to take any risks as it would be very embarrassing to come a cropper after 281 days and 65,000km on the road so I settle in trying to enjoy my final run on Daisy crawling along at a snails pace to the airport. 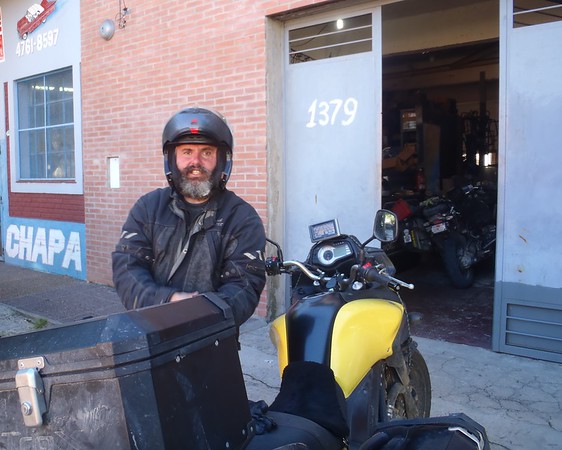 I was late but no problem I met up with Eliza Massy who was also shipping her bike Cape Town South Africa and we waited for Franco the agent who was going to guide us through the process.

First through security to the Export shed then prepping the bike which meant sorting luggage, disconnecting the battery, removing the sticky out bits such as mirrors, panniers, top box and screen (Broke this of last night) and letting some air out of the tyres.

Bike then strapped to a palette and sent of to be x rayed and sniffed by the sniffer dogs and then back to us to be shrink wrapped and that was it. This had taken a couple of hours I was expecting it to take a lot longer but all done we had a good laugh with the blokes working there and Eliza whilst doing all this so time had flown by.

Bye Daisy safe trip and I will see you in Amsterdam

First strapped to the pallet then off to be x rayed

Then shrink wrapped not sure that Daisy is that much of a plastic fetish!

We are shown how to get back to Buenos Aires on the local workers bus by Franco where we where dropped of in the center. I said Tata to Eliza I will meet up with her to finish up the exportation of Daisy tomorrow so I grabbed some lunch and had a nice picnic on the square in front of the pink palace and it was dawning on me that I was alone my companion for last year was strapped up on her way to Amsterdam via London and this was nearly at the end of my trip! Gulp pull yourself together you ponce big boys do not cry but it was quite sad an end of an era.

I made my way back slowly to Dakarmotos checking out loads of exchange places looking for the best deal on changing my USD to ARS on the blue market but none of them offering black market rates oops this could turn out to be expensive. At Dakarmotos an Australian couple had joined us at the hostel Adam and Mackenzie http://www.travelblog.org/Bloggers/AdKenz/ so another pleasant evening at DakarMotos chatting and sharing a nice Vietnamese meal that Hoa had prepared for all of us as a thank you for last night. 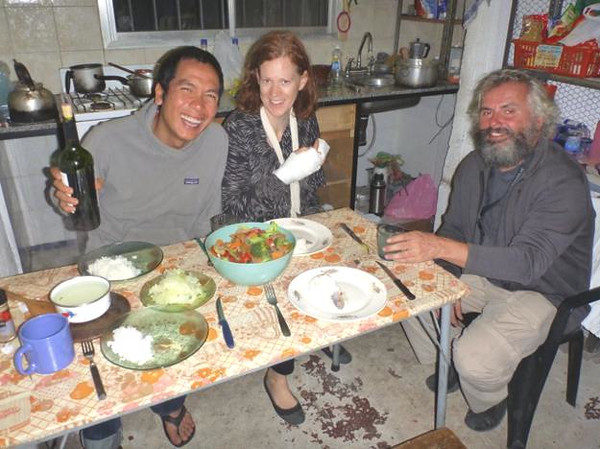 Next day I had got an address of a money exchange from Alex and Andrea so I was pinning my hopes on that I could change my dollars at a decent rate so I headed straight there. Extremely nervous as I was walking around Buenos Aires with about USD 2,500.00 in cash in my pocket so I was expecting to be mugged at any moment as it was written all over me that this bloke is the a walking cash machine mug him. I made my way to the address I had I am not sure I went to the right place but I did find a place that was offering 8.1 ARS per US compared with the official rate of 5.14 ARS per USD so result there so I changed 950 USD into ARS with a saving for me of about 500 USD on the exchange rate yes result so I had about 11,000 ARS all in 100 ARS bills next stop to Navicon office to pay for Daisy shipping and I meet up with again with Eliza. I got the paperwork and then we needed to go next door to the bank to pay and get a receipt for this payment. This took forever but Eliza was good company even though she was a bit hung over still 🙂

So the finances sorted and I was very relieved that I was no longer carrying that much cash on me anymore so back to Navicon to get the Master Airway Bill. It turned out they had screwed up with the shipping mixing my paperwork with that of Doran’s who also shipping tomorrow and he a had a special request around timing that cost a bit more for immediate shipping me I had no urgent timelines so it took a while to sort this out and many printings and reprinting of the MAWB as there where loads of other mistakes on it such as passport number and other details so caution always check the documentation.

So that is Daisy sorted I hope she gets there okay and I had a couple of days left before I to was to catch a plane. I was full of good intentions and list of things to do in Buenos Aires but at the same time I was totally exhausted and my energy levels at all time low so I made my way back to DakarMotos and I did not do much more than that as the weather was atrocious and I was happy enough just doing very little and just hanging around DakarMotos chatting and relaxing with the folks there.