Strange day the original plan was to go to go a place called Catamarca and I would be there for about 4pm ish as it was only 400km away. The hills of yesterday where short lived and I was back on the straight flat pampas roads and it was like that most of the way so not much to write home about.

Nice Place to stop to fettle with my chain again which is wearing out mucho rapido! 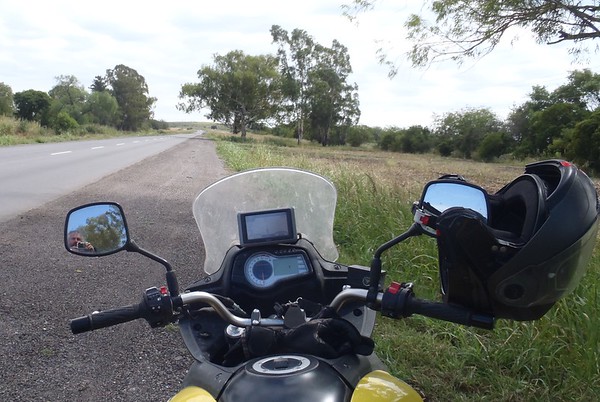 About 200km into the trip I stopped for some fuel but there was none available as they where topping up the tanks and they will be ready in 45 minutes but there was another station 5km down the road. Whilst all this was happening a Brazilian biker came over for chat about the road and he was adamant that Catamarca was not that interesting and the roads in and out were terrible he invited me in to the café at the petrol station to chat to his two mates who held the same views as he did as well as another local who had joined the dialog and for a while it was as if I did not exist as these 4 guys planned a new itinerary for me and all this in Spanish so even if I was involved in the dialog I could not understand half of what was being said. So they had decided amongst themselves that I was not to go to Catamarca but my new destination was to be Tucuman, which was 400 plus km away. I politely disengaged myself from the discussion and went back to Daisy and on to the other fuel station thanking my new friends for all the info. So a seed had been planted about the roads in and out of Catamarca being bad however not much else around in the direction I was going so Tucuman seemed a reasonable option but I did not fancy another big city and I was looking for small town hence my original choice of Catamarca. The turn of for Catamarca is not for another 100km so I have plenty time to come up with a new plan. The road is flat and boring and scenery wise the only bit of interest was a salt flat where I stopped for a while and mucked around there for a bit before resuming my route North.

Catamarca would mean getting into the mountains sooner however the sound of those 4 guys ringing in my ears I set my GPS not to Tucuman but to a place called Tafi del Valle which I loved the sound of it was 50km further than Tucuman but was a small village in the mountains so that was it decision made it is going to be a long day in the saddle but hopefully it will be worth it.

It was dull and boring until the last 50km when I finally turned into the mountains after been teased by them for while and by this time I was knackered as I already being going hard for hours so a thin difficult mountain road came at the wrong time as I was tired and I was making mistakes silly bugger always pushing to hard when its not really necessary but I was committed to my new plan so I made my way slowly up the mountain enjoying the change of scenery and trying to keep Daisy on the black stuff blind corner after corner up to 2000 meters and I finally made it to the outskirts of town and it was just starting to get dark and then today had one final challenge to throw at me a little diversion as the bridge was out and then there was a small matter of a river crossing. So I pulled up to see how deep it was as it looked pretty deep and when a car went through confirmed my suspicions this is quite a deep river crossing I had been riding for 10+ hours I was knackered and fate has thrown me another hoop for me to jump through bugger not looking forward to this. Then a small motorcycle came through from the other side as well as some blokes on horseback and they both stuck to the far side of the road where it seemed the water was a lot shallower so I had a plan and was across the other side in no time using this route making sure I had enough momentum as I did not fancy getting bogged down in the middle of the river (stream) 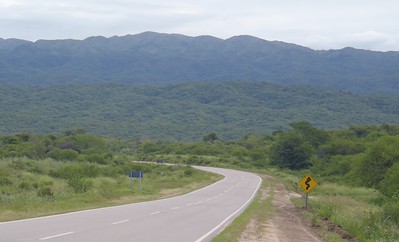 It took me a while to find the hostel I was looking for after riding around town for a while seemingly it had just moved down by the river crossing so had already driven passed it. Excellent little hostel and the price included dinner that evening so I scored there, as I had no energy to go into the village. I was that tired that I dropped Daisy whilst unpacking her. I had parked her badly so she was pretty vertical on the side stand and when I took the side pannier over she went. Of course I tried to catch her as she went down but she is a pretty big girl and there was no way I could hold her up as I felt my muscles go ping ping one by one so I just let her go.

Home for the night

I did not have the strength or energy to pick her up myself so called for help from a Canadian chap who was inside so the two of us got Daisy vertical again and parked her properly. Time to chill out as I am totally gaga dinner with a Canadian New Zealand couple, two Danish lads, an Argentinian lad and lass, and the ladies from the hostel and I cannot remember a single name god I am crap with names its embarrassing. Gnocchi, which was excellent and before I knew it was another late night after chatting to the folks very pleasant but time for bed for this tired little bear. I am staying another day here as I knocked out enough miles today to deserve a rest day.