First thing I did was fettle with Daisy chain as it was seriously slack except for that tight spot so I am not sure what to do run it tight or slack as its well buggered either way but do not want to loose a chain for doing the wrong thing so I sort of adjusted and it was still making horrible noises that I will have to live with till I can source a new chain probably in Buenos Aires so that’s about 2,500km away so I will have to keep an eye on this. Tyres a pretty finished as well so Daisy is dirty and in desperate need of some TLC which may be a long time coming.

I had breakfast and then hit the road tarmac oh what bliss 40km to the ferry and road straight to the front of the queue again where there was 4 Germans on BMW rentals so I chatted with them while waiting for the ferry. Not long wait and we where soon boarded. This time found out you had to pay in a little office, which I had missed last time, as I had to stay with Daisy and I could have done the same this time as no one was checking whether or not you paid but my conscience got the better of me and I did get a free trip on the way out here. Another short run wind getting up but on my back and side so not much bother to the border which was a combined one this time so exit Chile enter Argentina exit Daisy Aduana Chile enter Argentina Daisy Aduana not much queues in the way of queues so I was through quite quick Phillip spelt with 1 l should be 2 ll they claim it is not important lets see when I try and ship the bike out of here but I cannot be bothered to make to much of a fuss as I have pointed it out they say its fine so done deal. 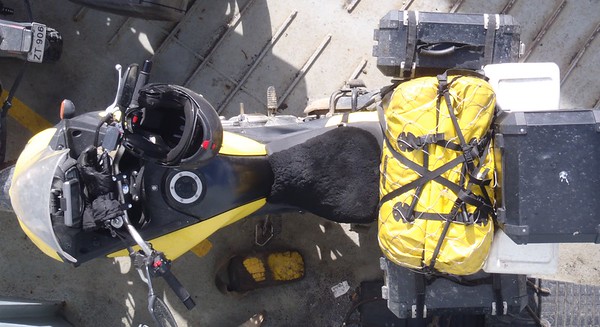 Put my head down and headed for Puerto Santa Cruz and the free camping. Wind was strong but in the right direction so not to much bother with it today. 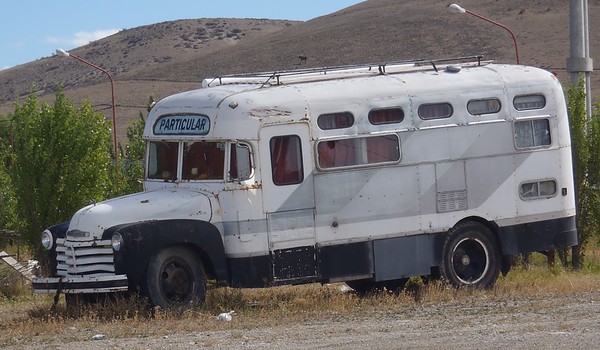 Got to the campsite and it was rather busy this time and bugger it was no longer free blokes at the gate collecting money. Oh well it is a holiday weekend I guess we where lucky last time. Same spot and then I head to the beachfront with the plan of using the Wi-Fi and eating as the same restaurant as we ate at last time. There was a mini festival going on so I decided to wander around that first and when I eventually tried the restaurant but it was closed so plan B BBQ sausage sandwich at one of the stalls and an ice cream so that is dinner sorted walked around the few stalls at the festival and watch a few turns on the stage and did the tour of the town (2 streets) and then headed back to the tent to work on this.

Twirly dresses again 🙂 Bloke at the front likes it to.

Always someone who wants to spoil the fun evening officer 🙂