I had deliberately headed for the coast as I knew that the only way out of here going south was on dirt roads and as we all know my mantra which is onward and forward and never go backwards on the same road so I was sort of forcing myself into a corner where I would have to do some dirt roads rather than double back. As we all know I am no great shakes at this off road malarkey so I thought lets get some practice in whilst I have options so that when I do not have any options I may have a vague idea on how to handle any terrain that may be thrown my way.

So I left my little castle and I was a bit sad as I loved this cool place would like to stay longer and perhaps learn how to surf but I will save that for another trip and time today it is off road practice day and I had picked a nice 60km long bit of dirt.

I went to fill up Daisy as I was heading into the middle of nowhere and I met an ex Chilean enduro champion and ask him about the roads and he gave me another alternative route a bit longer but according to him much nicer. I tell him I am complete pants at the off road business and he says I should be able to do it and that he is not sending me down a difficult road where I would end up hating him and Chile he wanted me to enjoy it and have a fond memory rather than a nightmare. So appreciated the thought and the sentiment and I was confident he was not sending me down some gruelling dirt track. He said not worry about the road but to focus on the other traffic on the road as that was far more dangerous and I new exactly what he meant as I had had my share of dodgy traffic on small back roads. His parting words there are are some parts with deep sand what! Deep sand one off my off motorcycling nemesis remember the last time Ho hum!

So Daisy is sorted route is sorted and I find a nice little café for breakfast and I am also sorted so I hit the road dull and it is overcast again also there is a sea fret so nice scenery only I cannot see much of it but I guess this means I can focus more on the road instead and be cool for my off road excursion. 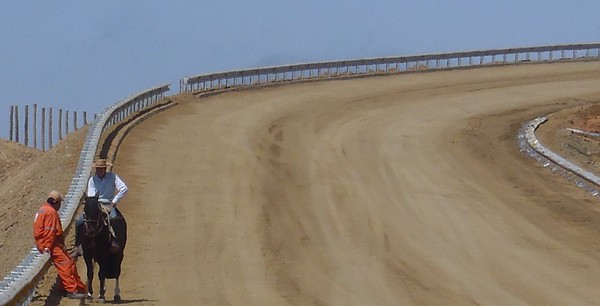 I hit the dirt and its reasonable a bit rough but manageable but every now and again bits of deep sand which are very difficult. One of these bits was on a steep downhill section so I was picking up speed but I want to go slow down as thick soft sand my ABS is totally confused so in other words it is not working and I am gaining momentum and all I want to do is slow down as I speedup into deep sand and deep sand and me does not mix well. I have read somewhere in a situation like this the best thing to do is hit the kill switch which turns of  the ABS off and use the dead engine to slow and stop the bike and then turn the bike across the road to it slow down to a halt. That’s the theory and who can remember all that when it’s all going pear shape so I do what I usually do and I wrestle the bike to a stop somehow and try and stay upright. And then I pray to all the motorcycling gods to help me stay vertical. That’s another theory and today that worked so I managed to slow the bike to a speed I could manage the deep sand on an incline and sort of skidded my way down the hill bit by bit not pretty but it got me down and where I wanted to be.

No one around to ask Directions!

This was the worse bit a few others but not so scary. Glad no one else is around as coping with traffic and this would be even hairier but now I am lost GPS no good as I am totally off road and there are tracks heading all over the place as they are doing a lot of forestation going on around here but which ones is the actual road so that is when you want folks around to ask. I find some guys chopping down some trees blocking the road and they tell me I am going the wrong way which I had figured out already so U turn and back the way I had come. I went down another track with a huge steep hill but does not look right either so go back up the hill and try another track nope going no where back down the steep hill when I hear a tooting of a horn and huge forestry truck flying down the hill that I been up and down a couple of time he pulls over and tells me I am going the wrong way yep he right he try’s to explains how to get out of this but he can tell I have not got a clue what he is saying its that language thing again so he says he will lead me out so he tell me to go ahead of him and he will direct me to the way out. So up the steep hill again and back the way I had come but this time with a huge forestry truck up my chuff so I am going a lot faster than earlier and trying to pretend that I can really handle the dirt for the benefit of the audience stupid I know it must be a boy thing. We finally get to the crossroads where I had turned of as there was a sign saying lorries only so I thought that was logging roads and not the track I turned down. My new mate gives me some last minute instruction turns his huge truck round and heads of in the direction we had just come for. Cheers mate appreciate you showing me the way out I could still be riding around their now otherwise so Muchos Gracias Senor.

I finally hit the coast and Tarmac covered in brown dust so certainly look the part of a hard-core Moto crosser but deep down I know I am nothing of the sort and I  got through by pure luck no skill or judgement involved. It is still dull and overcast but a nice run along the coast and then onto route 5 to Chillan to get some miles under my belt. I find a hostel and yes they have parking which is round the back but turns out round the back is a block away at the owners daughter posher hotel so I ride round the front dump my gear and ride round the block again to park Daisy safe and sound for the night much to the amusement of the owner who told me to this in the first place but I did not understand her I must improve my Spanish language skills!

Other good news it that it is  opposite a Chinese restaurant so after last night failing I got my Chinese dinner tonight yummy. I went for a walk around town and I had to sit down at one point as I had not realised how tired I was as it had been a long hard tough day.

Back to the hotel working the blog and beddy byes shattered will I ever be any good at off-roading I survived today but I am riding my luck a bit to much for my liking.