I made a Skype call home and I then had my complementary breakfast which was just a couple of fried eggs I was expecting more considering the price I had paid for the room and it was about 10.30am when I finally hit the road I am crossing the border into Ecuador today but first a visit to Las Lajas Sanctuary a church built on a bridge over a river in a gorge.  It was quite impressive spent a while just wandering around taking in the sight impressive building and great location and the sun has decided to say hallo as it was raining when I arrived. 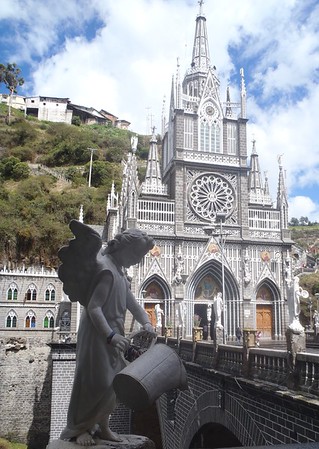 Next stop the border I first checked my bike out of Columbia  took 2 minutes changed some money with the a money changer took 5 minutes than it went all slow. A rather a large queue at immigration to check out of Columbia and even bigger ones on the Ecuadoran side. I fortunately bumped into Andrea who kept me company in the queue, Alex was trying to get insurance as he had been told by the Customs that this was now mandatory for Ecuador this is the first I have heard of this. Alex comes back and has not managed to get insurance something wrong with there systems so they leave me in the long queue and we arrange to meet in Ibarra later where who knows?

I finally get the to the front of the queue of immigration I have a bit of a joke with the lady when she asked if I was married and I asked if she was asking other than the  killer comedy I was in next the bike. Get a photocopy of my entrance visa than to Aduana who where rushed of there feet but I went through reasonably fast and there was no mention about the mandatory insurance and after a couple of hours I was in Ecuador. It was late so made haste to Ibarra and the GPS is not working yet another country that is not covered in any detail on the maps I have it took me a while to realise this.

I got to Ibarra as it was getting dark and no obvious place to stay I had an address but I could not load this in the GPS so drove round and round in ever decreasing circles asking folks for directions until I finally found the street and then the Hostel. From the outside it did not look like it had parking facilities but joy of joy there was huge parking lot around the back I had to drive a couple blocks to get there but it was safe and reasonably priced compared with last night. Alex and Andrea bike was also there so it looks like they coincidently that they went to the same place as me and it turns out they are in the room opposite me. I check in and arrange to go for dinner with Alex and Andrea and Joop who is staying at a Hostel next door so we pick him up and go for dinner at some Ecuadorian lady’s place Alex had met earlier and she was also going on a big trip of South America with her husband so she wanted to chat about this and it was her restaurant. So a very pleasant evening chatting in Spanish as the husband did not speak English that well. (I have forgotten their names :-()

Had my first drink since Houston a glass of warm red wine so I am not sure that counts as falling of the wagon and it would have been rude to refuse.