I am a bit confused on the days here but I think we arrived in Cartagena on Wednesday 12th which I covered in the previous blog and on Thursday I am up at 5am in the morning yep that is correct 5am in the morning as we had to be back at the boat to unload the bikes.

The process for this was to winch the bike into the rubber dingy and for the rider if they chose to sit astride their bike with one guy holding the front and one guy driving the dingy and then go to a crappy wooden quay where there where 3 strong Columbians who would heave the bike ashore and the rider would then have to jump on it and disappear ASAP of to the custom house as they did not want a huge crowd gathering to watch this spectacle (it is probably erring on the side of dodgy/illegal as well) If the rider was a girly wuzz he could opt to sit at the front of the boat holding the bike and let Floyd balance the bike. I chose for the latter option, as I could not bear the responsibility of anything happening to Daisy due to my lack of physical and balancing skills.

The rest of the day was one big bore waiting around at customs to import the bikes. We where told at about 11am that the paperwork would not be ready till about 2.30pm and we been there since 7am so we went back to the boat to start getting the kit of the boat and back to the hostel and as I mentioned before us bikers have loads of kit so it was 2 people plus kit per dingy ride and taxi so a lot of work.

Finally got the bikes out of customs insurance was waiting for us back at the Hostel so I drove back to the hostel got there late in the afternoon so the day completely gone hanging around at customs but me and Daisy are officially in the country. I forgot to mention that yesterday we also spent a couple of hours getting us not the bikes through immigration.

I am desperate to be alone for a while as I am tired and I am not feeling  that great and as mentioned I am not a great lover of large group type endeavors so I was planning to stay in Cartagena an extra day as I had not really had the opportunity to see it yet and I thought everyone would be leaving the next day leaving me all me own 🙂 some. Nope it looks like me the others have similar ideas so it looks like it will be a bit longer before I am out there again on me own. I went for a quite meal with Fred and Joop 2 Dutch blokes from the trip this I can manage it is with larger group where I start getting irritated. It was gezellig. Back to the hostel just chilling. I found out that tomorrow there is a total motorcycle ban for the day in Cartagena so this could prove difficult for those wanting to leave. 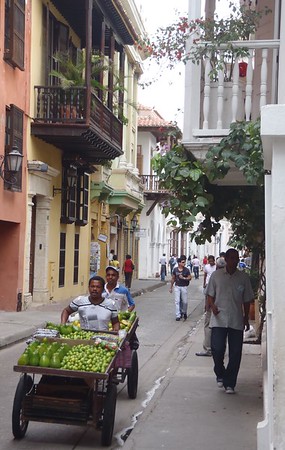 I have the opportunity to have a sleep but I am wide-awake at 5am again bugger. I wallow around the hostel for a while and then go for a wander around town taking in the sights on my own.

The  ban made it more pleasant to walk around. In the evening I have dinner with Paul Dylan Ryan and Alison who are leaving for Venezuela in the morning and I am heading south in the direction of Medellin and I am hoping it will much cooler there.