Do Enjoy the odd dance event every now and again

So another border crossing day last one of Central America Costa Rica to Panama. I leave the hotel it is already hot so it is going to be a sweaty border crossing. Nice run to the border stop for some fuel and breakfast and before you know it I am at the border.

I drive right past the Costa Rica Immigration and end up at the Panama side so a quick U turn and I find the Costa Rican immigration which is a tiny place buried at the side of the road no wonder I missed it. I sign myself out and then next the bike no problem and no charge that I can recall and then back again to the Panama Immigration.  Some helpers offer their service again but I politely decline they are also mentioning that I need mandatory insurance here but still not sure as I had mentioned allegedly I have insurance for Panama why would I need more cover. I hit the queue for immigration which was short and I am glad I did as later the line was massive no problem there and popped in Panama Tourist Info place to see about the insurance they seemed to think it was mandatory so for a simple life and it was only 15 bucks I decided I might as well get at as it may speed things up especially with my brilliant Spanish.

i was directed to a hole in the wall round the corner next to huge shopping mall for the insurance I could not find it at first until I realised it was really a hole in the wall I was expecting an office. I got the insurance then headed back to the customs to bring the in bike. The usual standard problems for them in trying to find England and the Netherlands on the Computer. (Reino Unido for UK and Paises Bajos for NL). And additionally the usual problem with the registration papers not having my name on it as this is on two separate other pieces documentation, which are used in NL for transferring title and not part of the registration. She insisted on copies of these so obliged and then the long wait while she 1 finger typed the documentation into the system and in theory I was in and so was the bike. All I needed was to find one last bloke to sign in the bike and I was in except for some fat noisy bloke not sure if he was an official started whitering on about fumigation and I told him that I did not need it for a bike but he was insistent and said if I did not do it I would be turned back at the exit to the border. So I sort my documents out drive to fumigation area and there is no one there except a soldier who waves me through and I pass through the final border check without getting fumigated and I am in Panama. (I pass through a couple more police and customs checks during the coming days no issues so I am guessing I have the full set of cards)

I am heading for a place called Boquete, which is not far so a reasonably short day the border the crossing has taken about, and 1 and half hours and it is an hour later in Panama than in Costa Rica. I get to Boquete at about 3.30 pm drive around looking for somewhere to stay when I spot a place with a few old bikes in the drive so I check that out and yes they have a room cheap in what looks like a shed in the garden but pleasant enough. Place called Pension Topas run by a German who has a Royal Enfield, Triumph and BSA in varying states of repair. 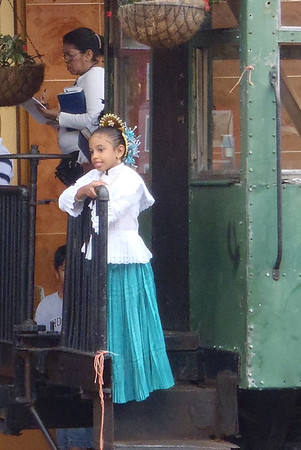 Visited a local Dance Event which was nice

Nice enough place unload and settle in then head into town and at the square where there is a dance competition and sort of mini festival going on so settle in and enjoy the surroundings. Do a bit more wandering it is trying to rain but not enough to get you wet or force you indoors and the plus side of this drizzle there are some amazing Rainbows I never seen so think colourful rainbows like these and they where complete arcs which is also something I never experienced so where is the pot of gold then.

I Took loads of photos of the dancing and the rainbows and then back to the hotel and later out for tea spaghetti and some seriously dodgy meatballs I think I going to regret these in the coming days. Another full-varied day I hit the sack tired but content.