Free Coffee and I got chatting with the young Dutch girl Lisette who was the owner of Casa de Lis. An expat girl who has lived all over the world as daddy worked for Shell sounds familiar. Nice chat gave me some ideas for my route South but they all went straight out the window. I said ta ta to Dave and Lis hit the chaotic traffic of Turrialba I filled the bike up and before I knew it was whizzing along empty roads and the sun was shining and life was good. All I needed was a nice place for breakfast with a view good cup of coffee and some eggs. Well just as I was thinking that I came round a corner and there was a coffee plantation with all of the above. Bloody hell I am one hell of a jammy bastard so a  nice breakfast enjoying the scenery the sun is out and its not to hot this is quite close to ideal as you can get.I hit the road again nearly getting squished by a huge lorry coming up the hill 2 abreast fortunately I had spotted them so I managed to pull to the side friendly waves from both lorry drivers. I spent the rest of the morning whizzing around the mountains thoroughly enjoying myself except for one thing that last of cup of coffee or maybe it was the eggs had triggered something and I had the screaming habdabs’ and my arse was on a hair trigger. I finally found some loos only problem no loo roll but now being totally fluent in Spanish I was able to find a chap who could get me some so what’s Spanish for wipe me arse as I am not sure we did that one in Spanish lessons. 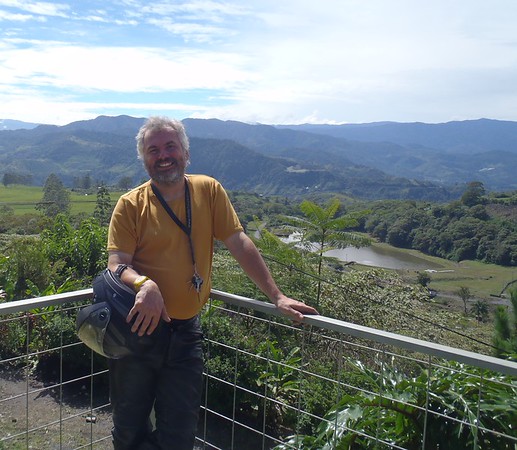 Whizzing around the mountains pleasant way to spend a morning

So a lot lighter I headed for Cartago as I was only going round in circles in the mountains enjoyable but going nowhere. Back on the Pan American but first I had to find it and when I was on it was not sure I had the right road as there are no signs and my GPS was as much use as a one legged man in an arse kicking contest. I resorted to asking for directions and getting confirmation that I was on the right road. I was expecting the road to be like the one I had been on yesterday full of trucks but it was deserted another reason why I was doubting that I was on the right road. It was a mountain road that kept getting higher and as it went higher it got cooler and soon it was down to 11 degrees centigrade I must be very high. Then over to the other side and into the cloud so no visibility and it began to rain. Again not enough to stop to put on my waterproofs and the temperature rising as I came slowly down the mountain.

On the way up I came up behind a police car that was crawling along doing 50km there where double yellow lines so I was not planning on passing them but this went on for miles I think they where trying to tempt me into getting frustrated and doing something silly but nope just settled in behind them for what seem like ages until they turned of and I had the road to myself again but checking my mirrors just in case they done a sneaky and pulled back out to follow me.

So damp slow run into San Isidiro due to conditions I am tired and my original plan of getting to Golfito gone out the window as I had spent to much time this morning whizzing around the mountains and I slow going due to weather conditions so pull over fill up the bike again and have a short break which is unusual for me as I normally keep on rolling I must be tired. So a new plan I am going to Buenos Aires purely for the reason if I do not make it to Brazil I can always say without lying that I have been to Buenos Aires only I will know this one is in Costa Rica. Its getting late and Buenos Aires really does not have much about and no places that I would like to stay I see a sign for hotel but its 14km down a dirt track so not today this boy is to tired. So I did my normal Philly optimistic planning and said there will be something better down the road so I kept on rolling. It was dry and I was following a huge pretty river down through a valley, which was nice, but I in the back of my mind I knew it was late in the day as the colours and light where nice and if I was not careful I would be stuck in the middle of know where and I was already in the middle of know where. I passed a couple of places that I declined due to my weird optimism that there will be something better further down the road. It was about 5.15pm and the sun was dropping fast when I saw sign for Palmar Norte 10km and I knew there where hotels there according to Julies Lonely planet from 1994 which I had borrowed from her and I had pulled it out and was occasionally consulting it. It was just getting dark when I arrived in town I did a quick tour saw no hotels oops but there where a couple of Chinese Restaurant that had cabanas and one of them was in the 1994 lonely planet so that was going to be home for the night as it was now dark. I have not said it for while but Philly you are a prick taking unnecessary risk when you know you could have stopped way earlier and risking running in the dark your cardinal rule number one not to ride in the dark!

Place I am staying is a bit of a shit hole but not many options as I had left stopping till the last possible moment and it has no WI-FI so went into town looking for Internet Café most towns have loads of these here but I could not find one I finally found one but he was closing then I noticed a sign down an alley so I had found the only other Internet place in town. Normally I would not bother about the Internet but I have another border crossing tomorrow so wanted to have a vague idea on what the process was but as usual with last minute research I am confused as hell as this this is the  first mention of mandatory insurance for Panama I have insurance already so I am not sure if I will have to buy some locally as well so looks like it will be fun and games tomorrow. I spent an hour on the net then I wandered around town not much to see just two streets I was looking for something to eat but nothing takes my fancy so I default to the Chinese Restaurant attached to the Cabana I am staying in and Fried Rice with chicken and ham. I think I have eaten more Chinese than local food but hey who cares when I was in China spent my time looking for Mexican or none Chinese food so guess that the way I am put together I like non local food whenever I am abroad. Back to my room and yippee this is now up to date but who knows when it will be published, as I am not having much luck on the Internet front these days. I do hope someone out there is actually reading this as it is quite exhausting keeping this blog going so some responses please just so I know that all my effort is not in vain and I am not just talking to myself 🙂

A couple of observations on Latin America bikers do not wave to each other here much but occasional they do beep their horn so I am not sure of the protocol here so I give an small wiggle of my fingers that if ignored I can pretend I was only stretching my hands as there is nothing worse than a none returned wave.

People keep flashing me and at first I thought they where warning me of danger up ahead or police up ahead seemingly that is not the case but they are flashing me as I have my headlights on permanently and that is unusual here so they are warning me that my lights are on. Not much I can do, as they cannot be turned of much to the frustration it seems of the locals. Occasionally they are warning me against cops further down the road but I am never certain  what the flash is for!

Costa Rica has a good way of collecting the rubbish there are large baskets in villages suspended high above the ground keeps it in one place keeps the dogs and other animals out and looks a lot tidier so great idea neighbouring countries should take note.