Not going to far today either but it does involve another ferry crossing which I do enjoy. It had rained quite a lot during the night so I was worried about the dirt track down to the main road as this may have turned muddy and me and muddy roads are not a great combination. I Packed the bike and I am down the hill with only a few brown trouser moments then a nice run to the ferry which was leaving at 11am so I had loads of time. I waved to the cop and the toll collector who recognised me from last time and they waved me through and onto the harbour where I tried to buy a ticket or at least find out how much the trip back would be no joy very unclear I need to pay on the boat so I went to get some breakfast and a coffee. Then I  join a very empty queue for the boat only me but it turns out I am at the wrong quay so redirected to the right one and another boat which is chockablock oops and there is me trying to be there early to ensure a place. I am approached by a guy who wants 10 Córdoba’s for road maintenance I refuse as I paid 30 2 days ago so they refuse to let me on the ferry I pull forward so I am blocking the road so if I am not getting on then no one else is getting on. Matey boy with the clipboard comes back with some uniformed chap who informs me that this is a departure tax and I have to pay or will not be let of the Island. We are only talking about 30 cents here but I have principles and the receipt is identical to the one I have already except a different town name on it, so after a bit of clowning for the crowds (unamused sailors and lorry drivers) I cough up then matey boy does usual trick with the change i.e. not have any and they want me on the boat which is about to leave but I am waiting for me change and then I will go. So I finally get on the boat bike tied down calmer and less wind than the journey here. 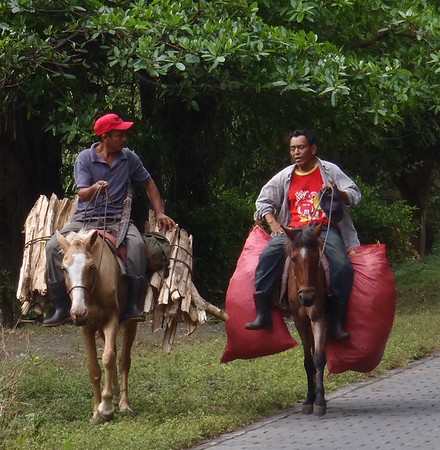 Do not remember this one in my highway code book!

Chatting to a Quebecker French girl who is travelling with a tour group of 16 people and she hates it and she does not like anyone in the group and or the tosser of the tour lead. Made me giggle as I have very similar views on group travel this is not my cup of tea especially if you get lumbered with a group of dickheads. Quite glad I am travelling on my own when you hear tales like this. The bloke comes around for the tickets and I do not have one and I ask him how much expecting another random figure and huge debate as I am certainly was not going to pay more than on the way here. Well it was another totally random number half the price of the journey on the way here! Go figure.

I got of the ferry slowly and cautionary as I did not want to end up on me arse like I nearly did last time and a short run to San Juan Del Sur. On the Pacific Coast again seaside town I did a tour of the town looking for somewhere to stay. Lots of places, but none that looked like they had a place for parking.

Chubby hot chap looking for a bed for the night

Finally find a place called Ola Italian run by an Italian Chap so another language to throw into the mix. A 4 bed dorm all to myself cheap enough and crisp white sheets and fluffy crisp white towels so I was sold and they had Wi-Fi but this turned out to be crap, slow and intermittent. I went for a long walk along the beach so from one end of the bay and back to the other dull and overcast but still pretty warm.

It is supposed to be a surf beach but not much evidence of that and when I got to the far end of the beach it started to rain so sheltered under a tree then in a café where I got chatting to a Canadian Couple who recommended a Chicken Place down the road for dinner.

It had stopped raining so back to the hostels where I spent some time cleaning up my computer as I have 120GB of memory but this is nearly full so freeing up some space by moving stuff to memory sticks and deleting loads of duplicate photos I have so hopefully that should keep me going for while.

I headed out again to the chicken place and the Canadian couple where there along with a German girl so I joined them but they had already eaten and the Canadian couple headed of as they where leaving very early the next day so that left me with the German girl called Katje (well I think it was that was her name as you all know how good I am at names and at this point I would like to apologise to anyone who’s name I have forgotten and or I have got wrong as its awfully wrong and rude of me so if anyone has any tricks for remembering names please let me know as I would really like to get them right but I am either not listening when I am  told the name or it goes in one ear and out the other) I spent a short but pleasant meal with Katje and walked her back to her hotel then back to the hostel fighting with the Internet which was not cooperating and I do need some info on the border crossing. It took ages got enough info but other things I needed to do would just have to wait.

Turned out quite a late night in the end beddy byes 4 beds to choose from all with clean crisp white sheets.

I had accident with my toilet bag the shampoo had leaked everywhere so I cleaned that  and then trimmed me beard which was getting a bit wild and had a shower and crawled into bed for a good night sleep.