A bit of a sleep in then I hit the showers bugger no water easily resolved just a question of getting the pump switched on downstairs. Tried a Skype call home but continually getting an engaged signal so gave up and headed in to town to find somewhere for my breakfast. Simple exercise one would think but as I fancied pancakes and honey as I had seen them advertised on the central plaza I thought it was a no brainer but they did not have any I finally found a nice little place that did have pancakes on the way to the market so I had a nice relaxing breakfast there.

Spent the rest of the day just wondering around the town people watching and taking loads of crap pictures.

Base Ball a national passion for old and young in Nicaragua

I spent some time watching the local play baseball there national sport and I eventually went back to the hostel where I sat on the balcony reading my Kindle and watching the world go by. I headed back into town again for dinner  and I found a Chinese restaurant down a side street and had the special fried rice with prawns and chicken I am hoping that the prawns do not come back and haunt me and then to the Eskimo ice cream shop for desert and I wander for some more before heading back to the hostel for more blog writing. So a bit of a rest day. 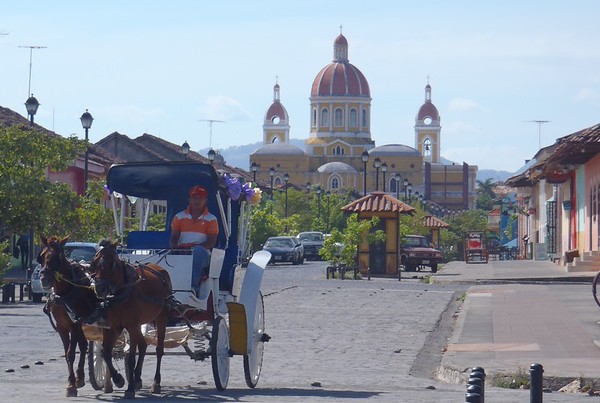 Yesterday I was stopped by the police and the first thing he said to me was that I had done an infraction which even with my bad Spanish I understood infraction seemingly I had been in the turn right lane and had gone straight on at a roundabout which was in fact correct but in my defence it was not well marked and I only saw this when it was to late so I plead my innocence and I am let of with a warning so maybe my Spanish is not so bad after all.

I was walking along the lake when this bloke starts taking photographs of me which is weird even weirder was when he asked whether his wife/girlfriend could take a picture with both of us on it which of course being the tart that I am I obliged so she took pictures of me and my new best mate! And then they jumped onto a horse and carriage and disappeared. I wonder who he thinks I was I had my yellow Valentino Rossi t shirt and I look like a smelly hippy but I guess he thought I was some celebrity or it was just plain weird. This used to happen to me all the time in China but it’s the first time this happened on this trip well weird me thinks