Back in the Yukon

Well I am back in Whitehorse why? because they have two Tim Horton’s there that is why. Not really just a happy coincident. I had a great night sleep I had pulled my long Johns and thermals out as I was expecting a cold night but I was very toasty so it was difficult to get up. The sun was shining and it was warm a total contrast to yesterday I slowly pulled my kit together and headed to a place called Fast Eddies and I had missed breakfast by 15 minutes why is it that they cannot serve breakfast type food all day it is beyond me it cannot be that difficult and some of us can eat breakfast type thing at anytime of the day not only in the morning so I ended having a teriyaki chicken burger for breakfast. I missed the café when I was leaving town so had to do a U turn and the site I saw made me regret my decision on leaving Alaska so soon blue skies snow covered mountains oh yes that was the reason why I was leaving snow!

Why am I leaving Alaska

A beautiful day in the saddle after a late start a good road except for the odd roadwork’s but you had perfect black tarmac, purple flowers on the side of the road, green forest, turquoise lakes and snow covered mountains either side of the road as well it does not get much better than this and it was like this for most of 600 plus km I did today.

Back in the Yukon

Oh yes I am back to the metric system and it was between 18-22 degrees centigrade all day total opposite of yesterday but a most enjoyable day in the saddle. I headed for the same hostel I stayed in last time but this was full so went to another one just round the corner which was just as good it was 9.30pm when I got there but I had gained an hour coming back into the Yukon so I walked out to Tim Horton’s for my fix as its been more than week since my last one and I will be going there for breakfast tomorrow as well I am heading South to the Cassiar Highway to see how far I get along it but if anything like today I am happy to ride forever with scenery like I have seen today so do I regret leaving Alaska maybe but Canada is also tops as well 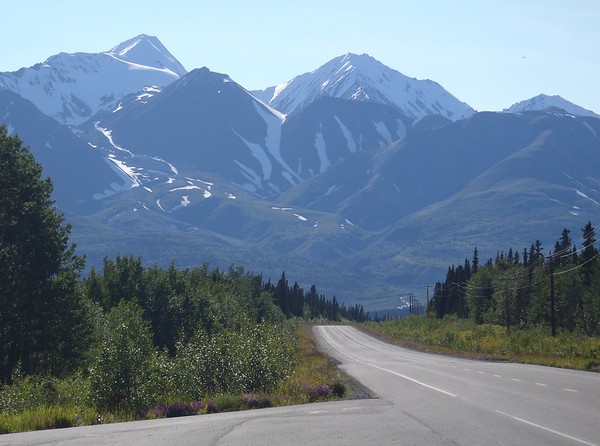