Got up and the sun was shining no bears this morning so a relaxed break down of my campsite soaking up the sun not getting any quicker at this but when the sun is shining who cares. Leaving Nova Scotia and heading for Prince Edward Island and as usual Philly calculation on distances are totally wrong so I arrived in Charlottetown at 9.30pm that evening, in my defence there was an hour and half wait for the ferry and the ferry also took an hour and half so I would have been there in time for tea so my calculations are reasonable 🙂 I was cream crackered and I did not fancy another night under canvas even though the sun had been shining all day and it was a lovely evening I think my love affair with me tent is over especially when you can get a bed plus breakfast in a hostel for roughly the same price. So many thanks to lovely people of the VIC (Visitor Information Centre absolutely brilliant folks have been nothing but helpful and there’s is also free internet), I had spotted there was a hostel on PEI Island so plugged the address into my GPS and as I said arrived at 9.30pm at night. I went for a walk as my head was a bit woolly as it had been a long day on the bike and I thought maybe I will stay 2 nights here as the place had a nice vibe about it but I changed my mind when I was on the internet later that evening and I typed in Charlottetown PEI to Fairbanks Alaska into Google maps and I got the following response

That’s bleeding miles as I said before these distances are blowing my poor little brain when I was looking at the map of the world I have on my wall at home it does not look that far but in reality I may have bitten of more than I can chew so as per Oliver Twist “I am reviewing the situation!”

Huge Bridge to and from PEI

Good night sleep and another beautiful sunny day I could get used to this, a pleasant free brekkie chatting to the young backpackers so another slow start. Plan for today was to go to Cavendish to see Anne of Green Gables house/museum like I said earlier I have paid for my discover Canada ticket and by Jove I am going to use it.

I went for a walk around the grounds and then decided I better get a move on if I was going to get to Quebec City 850km away in 2 days. I drove over the Confederation bridge after stopping and doing the mandatory photo shoot.

And also went to the VIC to get my free map of News Brunswick my 3rd province/state or whatever they call them things here. I had another pleasant chat with the helpful lady in charge and I figured out the nicest slash most efficient route to Quebec and the first thing I did was take a wrong turn and I went off in a completely different route than planned as my GPS decided it wanted to try something different.

Being seeing signs all over the place for lobster and I am not sure if I like it enough to shell out on getting one (see the pun) so to lower the threshold I had also seen McDonald’s advertising a McLobster so for lunch decided give it a go and had a McLobster and Chips which was how you say different still not sure if I am a lobster fan or not yet.

The lady in the VIC described the route as tree rriffic and excusing the bad pun she was right as was another biker who I had met outside McDonald’s who gave me a more interesting route to Fredericton than I originally intended so thanks for that and on the way I nearly killed Bambi! I was barrelling along the road under the speed limit of course and further up the road a dear runs out into the road no problem its quite away up the road and its seen me so its bound to get out the way nope it stops dead in its track and then tries to do u turn and head back in the same direction its just come from so was just like Bambi on the ice except it was tarmac and I was headed straight for it I was able to wash of enough speed and to see Bambi disappear into the undergrowth. Note to self they are not kidding about animals wandering out into the road over here I must moderate speed and be more careful. Half an hour later barrelling along at a fair rate of knots last scare of the day already well forgotten.

Saw 30 degree centigrade on my thermometer so I took the lining out of jacket and pulled out me summer gloves the last 20 minutes of journey it had started to rain but no problems as the rest of the day the weather had been great. So your asking is he camping tonight well the answer is nope found another hostel where I have a dorm all for myself with Internet so I am doing my finances eeeeeeek and updating this blog. Tomorrow is Quebec two nights there me thinks depends how quickly I get away in the morning as it nearly 600km so another long day in the saddle.

I was wondering around town and I saw a part that was cordoned of so I asked what was going on and the answer was there was going to be a light show at 9pm so I came back expecting a full sound and light show projected on the building it turned that they had just put some new lights on the building and the premier of New Brunswick did a speech and flicked a switch not what I was expecting but amusing to be part of this as it took a long time as they had to do everything in both French and English. 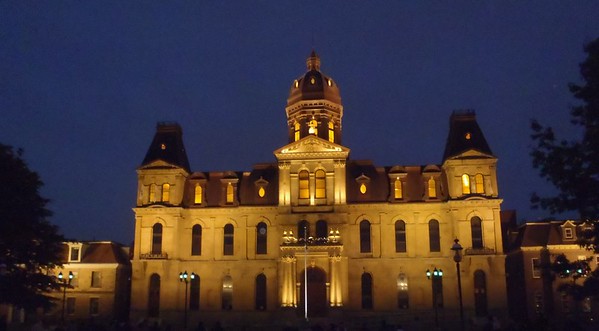