Why did the chicken cross the road? So that he did not get squashed by Daisy

Riding with Alex and Andrea today so this is first time this trip except for the run to catch he boat in Panama City that I am riding with someone else. That was riding with a larger group with just the two bikes this should be easier. I am trusting my GPS to get us out of town with no problems and then  to the border into Peru and for once it does not disappoint so I may finally have a map that I can trust 🙂

Hot day and nice run first through the mountains road a mixed bag of good roads to awful lots of landslides so lots of rocks and loose debris on the road and road works where they have ripped the top surface of and left it like that for the time being so reasonable progress but you still had to be wary. 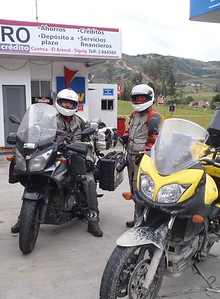 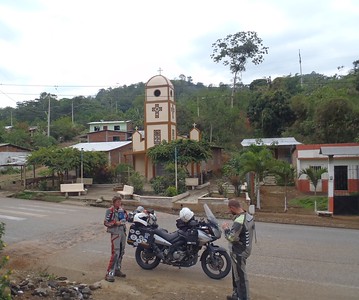 We came out of the mountains on to a flat coastal plain next to the Pacific passing through banana plantations on our way to the border. We wanted to fill up before crossing the border, as fuel is cheap as chips in Ecuador but the petrol stations closest to the border where all shut so I am guessing it is to stop folk doing cheap petrol runs from Peru. We drove back about 5km and were able to fill up there we adversely jumped a huge queue which I did not see as I pulled into the station so a bit of laugh with the attendant and the soldier which where present at all the petrol stations near the border and then onto the border.

Then to immigration for me which was in the same building so you queued to exit Ecuador and the right next to that the queue to enter Peru. Fortunately very few people so this part went quite quickly and the onto the Peruvian Aduana. Where we ended up behind the large group of Columbian Bogota V-strom club again.

Philly and Daisy Fan club waving us out of Ecuador

This is where we heard about mandatory insurance for Peru first time I heard of this as this was not one of the countries on my list that I needed to buy extra insurance as in theory this was covered in my total central and south America insurance so I was planning to bluff my way through this one and they did not ask for it but Alex had to pay 35USD for a months insurance. My problem was that they had put my Nationality down as Ireland again and my VIN number was incorrect so asked them to correct it but they refused they just crossed it out so I asked for a signature on the changes they got all pissy and so did I as I was hot tired and sweaty but there is no use in me getting angry as they have all the cards So the guy rips up my paper work and give me a blank form which I have to fill in by hand and this time with the right information. So with a bit of help from my new Columbian friends I had the paperwork completed and written in my bad handwriting but I had all the stamps and signatures on it so me and Daisy are allowed into yet another new country Peru wow we are really ticking them of the list 🙂

This had all taken about 2 hours and it just gone 4pm so we made tracks for Mancora which was about 129km away but we had already figured we where not going to make it before it got dark so we started stopping at all the beach type resorts places asking for rooms. This is where Andrea was useful we would  pull up and she would jump of and go in and check the prices and say yay or nay and if nay we would roll on the next one. She was also had been the official photographer for the day so loads of photos taken of Philly and Daisy on the move.

Not much luck on finding something as it is very expensive along this coast and when we did one last try before we where going to try again to get to Mancora where we knew there were cheaper options. 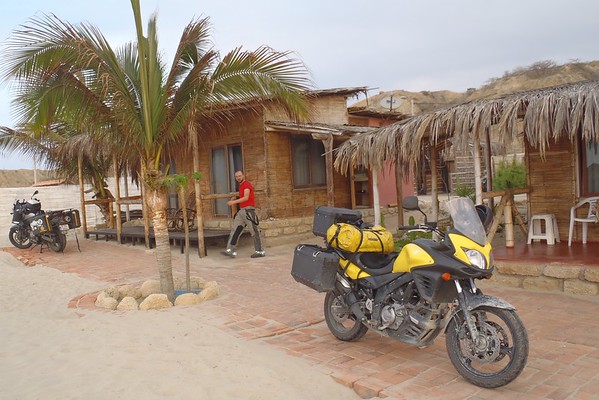 We had a bungalow on the beach 10USD each and they kept the kitchen open for us so fried fish and rice on the beach watching the sun go down with a mad kitten for company. Perfect I could not ask for much more even debating that it is so nice here we may have a rest day here tomorrow and that is awfully tempting as I have had a tough couple of days.

Nice here may stay another day