Lots of Volcanos in Nicaragua and fields this colour brown loving it !

There’s were of couple of things I forgot about last week they being;

So back to today I set the alarm clock for 6.30am keeping in the rhythm I had built up whilst going to School and the idea was that it should be cooler at that time of the day making the planned ride to Granada easier.

I got the bike out through the restaurant and bar this time no cheering crowd as it was early and no one was up and the first port of call the beach for breakfast. 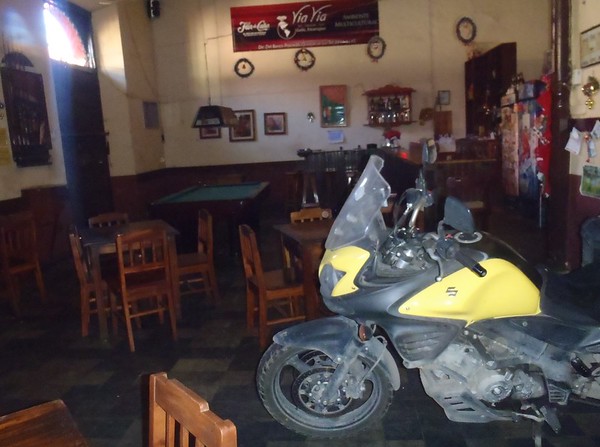 So was it cooler you all ask nope was it bollocks 26 degrees and it slowly got hotter as the day went on. The beach was about 15km away from Leon I am not sure what I was expecting but I was a bit disappointed when I found the road did follow the coast and you could not see the sea as there where houses between the road and the beach blocking the view. So eventually I just drove into a Hotel/restaurant and it turned out to be a great little breakfast spot overlooking the Pacific just what I was looking for. Downside was the American owner a chatty know it all been there done it all type of chap was offering me info even though none had been requested I manage to loose him and positioned myself in the shade looking out at the waves when I was joined by a local fisherman called Roger so another inane conversation that I rather not had have all I wanted was to enjoy the beautiful setting with a my cup of coffee and my pancakes which I finally got and Roger realised that I was not much company at that point and buggered of leaving me alone which was great as I had been looking forward to this for a while after a week living in Dormitories I needed a bit of Philly time.

Suitable attire for the beach me thinks! Maybe not

After breakfast and a very short walk on the beach as it was getting hotter I had a further drive around this coastal village and then headed back into Leon. I got lost in Leon even though I had lived there for a week but I asked a friendly copper who pointed me in the direction of Managua. It was nice as long as you did not stop for long and there was a cool breeze but the temperature was 30 degrees plus and as we all know this chap is not designed for this kind of heat. Tootling down the road when I see a sign for Viejo Leon and Momotombo volcano so as I have not got far to go today I decide to go and explore. Nice little road through nice countryside with the Volcano in the distance getting closure all the time. Eventually I ran out of proper road as it turns to deep volcanic ash dust so another substance to add to the ever growing list of road surfaces that Philly cannot ride on so stopped here by a lake overlooking the volcano took a few pictures and then back the same way I came before I cooked. Keep on moving is the trick in this heat. 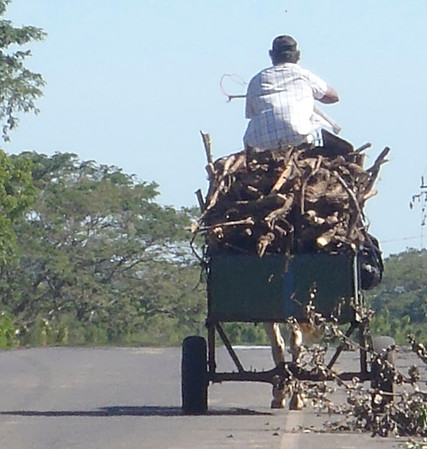 I spent an hour or so first at the visitor center than at the crater itself there was a nice cool breeze that took the edge of the heat but it was still bloody hot.

I finally hit the road and hit Granada at about 4pm ish with all my little detours this had turned into quite a long ride but most enjoyable in spite of the heat.

It took me a while finding somewhere to stay but I find a quite little hostel 10 minutes walk from the central square which has a garage for my bikes dorm rooms 2 to a dorm and I am the only person in mine and its cheap as chips and the Wi-Fi is reasonably fast as well.

So after a quick lie down I headed into town for my tea I had been told that Granada was quite touristy and was hoping that there would be a McDonalds and or Burger King type of place as that is what I have a craving for but nope no luck I did find a Tiptop the Nicaraguan KFC so that will have to do instead. A Bit of a walk and then back to the Hostel getting this up to date. I had a bit of an issue logging into WordPress as it kept asking me for my user name instead of my e-mail address and was I locked out for a while as I for the life me could not remember it so I was nearly banned from me own blog. After a bit of research I found out my user name is the same as your E-mail so that is why I had not written it down as I thought that is going to be easy to remember well I guess not.

Going to spend another day in Granada as it Sunday tomorrow so a kip in and a lazy day is called for.