Lost who cares when the views are like this 🙂 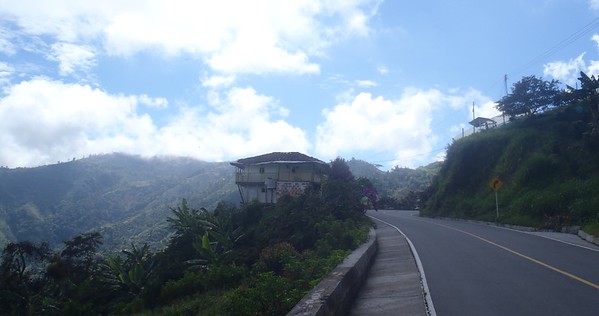 For some reason I have booked into a hostel tonight for two nights and looking at the map it’s seriously hardcore to do this run in one day especially as I am just recovering from the screaming habdabs. Well there was some rational for my ludicrous planning as I had sort of arranged a service for Daisy with http://www.motolombia.com and they also owned a hostel so two birds with one stone but why in one day beats me should be doable if nothing goes wrong. Well you guessed it I pulled out of Medellin and got totally lost my wonderful GPS not doing its job properly as usual and absolutely no real detail (Note 22/12/2012 I have hopefully resolved this) so I was driving around totally lost getting no feedback from the GPS. At one stage went into this little village down a steep hill and and had all the locals helping me but they were all sending me in different directions but I figured out where I did not want to go and took it from there. Getting out of the village was difficult as the road was practically vertical wet and slippery so when I reach the top where it met the main road I had to stop as there was traffic but as I stopped the front wheel locked and I started sliding backwards downhill so much for ABS in this situation the front was locked no grip I could not get to the back brake as I needed two legs down to try and balance Daisy so the only thing left to do was give it some welly and get some forward momentum and I catapulted myself on to the main road. Fortunately for me  it was clear bloody hell its going to be a long day. I got lost again in another town and I asked a chap the direction to Fredonia he said I was in it! My GPS said it was another couple of miles down the road! Lost again GPS says turn right in 100 meters get there no road! Hit recalculate and it adds another 50 0r 80km to the distance! So that’s how my day went so the chances of getting to Cali completely gone so it was on to plan B as I always have more than one game plan but then I hit a fast dual carriage way and started chewing up the miles, I stopped for fuel and the guy said its was only another hour to Cali my GPS said two hours guess who I believed today. So back to plan A and rolled into Cali just as it was getting dark no problem as I had a bed booked. 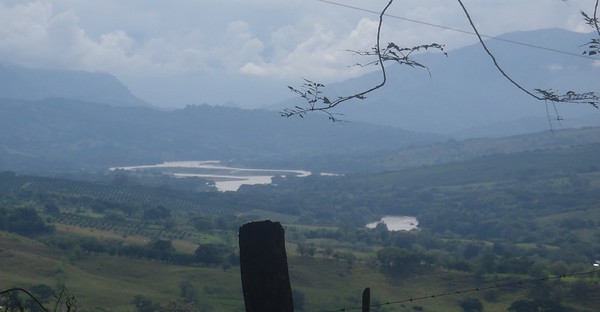 Sure I crossed this river before!

I had a chat with the wife of the owner of http://www.motolombia.com about the service and she said to chat with the Mechanic tomorrow so it is time for tea. I have noticed in South America when I get of the bike at the end of day my face is absolutely filthy  and I look like I have been working at the pit face all day I am covered in soot and some of these old Diesel trucks and busses are kicking out some serious dirt.

Chinese meal huge so get a carry out so that dinner for tomorrow night sorted and I guess my stomach has shrunk (yeah right!) after not eating much for days.

On the way back to the Hostel I pass a bike shop and recognise one of the BMW as its has Belize plates so that must be Alfred from the Stahlratte and look around and I spot him. He has lost Joop his travel companion somehow and was on his own in town so I join him for dinner (no not two dinners now I am better but joined him whilst he was eating and had a soft drink and yes I am still of the booze)

Been a long day about 10 hours in the saddle so quite glad when I hit the sack it is a service day for Daisy tomorrow. 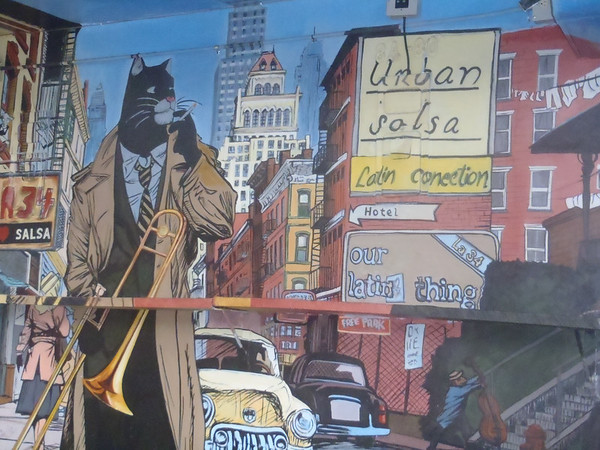 Xmas cancelled santa slips on ice on holiday in Cali

A good night sleep only two of us in an eight-bed dorm I went across to the Motolumbia shop but there was no one there but the mechanic eventually turned up about 30 minutes later a young chap called Francisco (I think :-() he spoke no English so we figured out what we needed doing with my bad Spanish and my Spanish workbook manual and that was it Daisy was going to get an oil change no new filter as there is a special tool needed for that but I only need to change the oil filter every other oil change. He was also going to give her a once over to check if anything seriously wrong. She will be ready at 1pm. Efficient and I liked the guy so I was happy to leave Daisy in his capable hands and then off to find some breakfast.

Daisy getting TLC from Francisco

The name of the place I had breakfast was called “Kuty” which made me giggle as that is quite a rude word in Dutch. So a relaxing breakfast and I wander down to a mall looking for a map a new earing as I had ripped one of mine out playing volleyball it had got caught in the volleyball net on the Stahlratte trip. I treated myself to a Mcflurry ice-cream as me bum was sort of behaving and generally just doodled about till 1pm

I went back and he was just finishing up and he had changed the oil, lubed the chain and the cables cleaned the air filter, touched up some paintwork, charged the battery, and lots of other little things. How did I know he done all of this well he had photographic evidence to show me. Very impressed by the professionalism and to top it all it cost me for the labour was only 20 EUR plus consumables. So Daisy ready for the next thousands of km except I will have to start sourcing new tyres soon.

Cali Sculptures which ones are real

Guess I am sort of on the right road

Trying to remember this day as it was another long day I got out of Cali and headed into the hills. Daisy feeling good after the TLC she had received twisty roads with lots of slow moving traffic that needed to be past on blind corners and brows of hills you have got to be brave here or you will not get anywhere far fast but you can also be to brave as I past a crowd looking down a huge crevice where something had gone through the barrier I could not see what it was but I did not hang around to long to find out either.

Still no idea what had gone through the barrier

Later in the day it started to rain so that slowed the pace down as the roads turned greasy and it was getting late again. Remember I mentioned that there are toll roads here but next to each is a small track for motorcyclist to go through for free. So far I had managed to squeeze through with my luggage but today there was one it was late it was wet I was tired and I took a chunk out of the wall as I wet through I just tapped it but it put the bike into a bit of a wobble so that toll booth was not taken very graciously. I found out later others had issues with this toll booth as well Fred had hit it like I did but he smashed his luggage so bad that it needed repairs so I guess I was lucky but note to self check fittings and if it look like its to narrow slow down to check 🙂

I pulled into town just as it was getting dark knackered I had a vague idea of a place to stay when the police stopped me. A big lecture about no bikes allowed on the square today or something like that but I do not understand Spanish when it comes to rozzers so feign ignorance but she keeps whitering on I had just let a pedestrian cross the road maybe that is what is upsetting her. She tells me to pull over by another copper so I do this and sit there like a lemon. The other cop is giving a ticket to another motorcyclist and I try and get his attention and he asks me what do I want? I point at the other cop and he shakes his head and tells me to bugger of so I do that very promptly. I turn around the corner pull over and get out my lonely planet, as I still need somewhere to stay. I have stopped outside a shoe shop and the bloke there asks me can he help and I say yes I am looking for a hotel and can he point me in the right direction. He gives me a funny look and points behind me and hey presto there is a hotel and it’s the one I was aiming for there are two doorman who have seemingly were also trying to get my attention as well god I am frazzled. So I pull into there car park thinking this is a bit posh as the bloke offers to carry all my kit to the front desk. It is a bit of a choker when I ask for the price of the room so when I have picked myself of the floor the negotiations began which involved getting the Manager. I managed to half the original price but still bloody expensive oh well a bit of posh never killed anyone so I agreed the price and went and got the rest of the kit of the bike which like I said was carried to the room by a bell boy. I get cleaned up and go in search for food but I am not staying out long at the rate I am paying then back to the room and watching the goggle box and I have a hot water bottle how posh is that 🙂

Note to self check prices of other folks recommendations as they may have a slightly different budget than the one you are travelling on but it was nice  bit of posh and it’s a lot cooler here so ideal for me who likes it cold when I am sleeping nice and cuddly under the blankets.