I woke up quite early which is not surprising as I had gone to bed early but I thought I would get a lie in as well but the Bin men where making a racket clearing up the campsite and it was already starting to get hot in the tent. It was last Friday morning when I had my last shower it was now Monday Morning so you can imagine I looked and smelt awful. Packing the tent did not help this position much but it actually made it a tad worse that I was glad when I finally hit the road I had some coolish wind breeze to around my smelly body. Today destination Chicago which is only 180 miles away so no Freeways for me today. Stopped in Lafayette for breakfast/lunch and I  was getting some funny looks as I said before I looked like shit warmed up. I went into Subways where they tried to serve me cold coffee, well I was not having that so made a bit of a fuss you could see them cringing as this hobo demanded in his perfect English accent that they put his coffee in the microwave as coffee is supposed to be served hot. Got to Chicago and the Hostel at what I thought was about 4pm but it was 3pm as Illinois is an hour early than Indiana all these time zone changes is giving me brain ache. I checked in OK and then I asked about Parking and they said yes no problem that will be an additional 25 bucks a night. No way Jose! I could park on the street a block away and that was free so I went for that option. While I was unloading the bike I walked round the back to check the parking facilities and I saw there was loads of unused space that I could easily put the bike in without taking up any car parking space so I went and had another word and they said yes I can park the bike in these dead space and that would be 10 buck a night. Bugger that talk about being motorcyclist friendly not so my bike is parked on the street a block away I hope my bloody mindless action does not turn round and bite me in the bum and it is there in the morning. It seems quite a nice neighbourhood and it is parked in front of a church. And the sign says no parking tow away zone when there is more than 2 inches of snow so heres hoping that it does not snow tonight.

Posh Hostel and quite expensive as well but I guess I am in Chicago so these are big city prices. First thing I did was get a shower oh god I needed that and I spent the rest of the afternoon doing my washing as I was running out of clean stuff so as yet have not seen much of Chicago except for the drive in where I drove right through the centre and I like the look and feel of this place. After I had done my washing I went to a Supermarket to get some dinner and later I walked to the lakeside where there where some great views of the Chicago skyline. I say lakeside for me this is more like being on the coast as the Lake is huge and you cannot see the other side, which for me is not normal, attributes for a lake. I Wondered round the neighbourhood which is called Fullerton and it is very nice the dilemma I have now is do I stay just tomorrow or 2 days as I am not sure I cannot do Chicago justice in just one day but the clock is also ticking on when I need to be think about going back to the NL and where I need to be to do that efficiently. Luxury problems I know but I still need to make a decision on this. I will decide in the morning, as procrastination is a good friend of mine.

I got up quite early and had the free breakfast which was surprisingly good and plentiful for a hostel. I have decided to stay an extra day, as after checking the bike it was still there which it was a relief so with that decision made I could now take it easy. Last night I had been doing some timeline planning as I had arranged to meet an old friend of mine Supriya who lives in Nashville and it would be nice to be able to tell her when I maybe turning up on her front doorstep. It sounds quite a simple exercise but there are so many variables so I was only able to come up with a rough estimate of 2 weeks but based on my planning thus far this either very optimistic or very pessimistic and as I have nothing to base the planning on as it is all unknown territory to me. I also need to figure when I will be going back to the NL and that is turning into a logistical nightmare as well. So having made the simple decision of staying here an extra night I set of to get an all day travel card and discover the delights of Chicago. The Plan was to use public transport as much as possible but again this plan was ignored as I spent most of the day walking from one Chicago hotspot to another so I am well knackered but it was very enjoyable but I certainly walked for miles. Tomorrow I will use the public transport more and give me poor little legs a rest

I am glad I decided to stay an extra day in Chicago as I really enjoyed yesterday and was looking forward to doing it all again today. First thing I did was go to the Zoo why because it was free.  Normally I am not a big fan of zoos as I believe animals should be in the wild not in cages but I do like seeing animals so zoo does make sense at a certain level but I still have mixed emotions on this especially after I saw one of the lions there pacing his area he was walking around a log and just kept on doing this and was still doing this later when I went past so I am sure that not a good sign when animals are pacing like that surely it is a sign of madness and stir craziness  creeping in and this was one of the reason I do not like going to zoos when you see unnatural  behaviour like this.

True to my word after the zoo I hopped on a bus to minimise the walking today and then on to the L train L for elevated and went round the loop a couple of times taking pictures. This was after waiting for ages for a purple line train to come eventually I  just got on the first train coming through and later I found out that the purple train only runs in the rush hour. 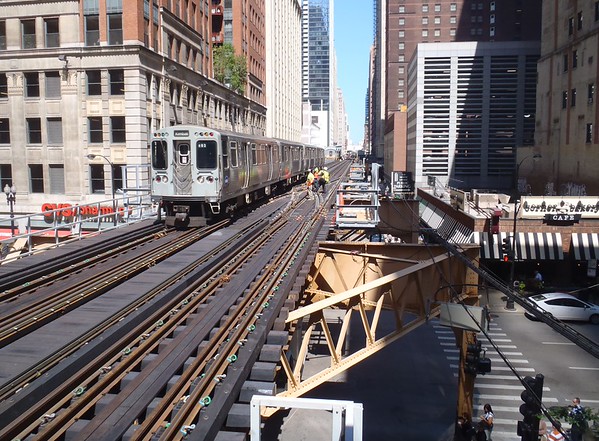 So spent all day wandering the town on a mix of train’s buses and walking.

I went to China Town for a late lunch early supper and I walked the golden mile and eventually got back to the hostel at about 6pm ish short rest and then back into town to the John Hancock Building again as I had been there yesterday and it was fantastic and you could buy another ticket cheaply if you brought it whilst you where there the first time so this time I was going to watch the sunset.  After the sunset at about 8.45pm I was just about to get in the lift and leave when the attendant mentioned that on Wednesday night there was a firework display at 9.30pm from Navy Pier so a quick U-turn and I grabbed a seat and waited for the display to start whilst waiting I got chatting a nice German lady who had just qualified as a Doctor. Watching the fireworks from a skyscraper was weird as normally you are looking up at the display going ooh and aah but now I was looking down on it with no sounds as I was indoors excellent if not a bit strange!

Afterwards back to the hostel which was a bit lively, quite a young crowd in all trying to out cool each other which is amusing to watch bad thing was there where a couple of guitars there as well and there is always some sad git who thinks they can play a bit murdering all your favourite or not so favourite songs I do wish they would shut the f**k up as I have no desire to hear some talentless git play the guitar and sing tonelessly along with it. I do that myself in the shower where it bothers no one mini rant over guess I am no longer young and or cool.