Back in the mountains again yeah!

Back on the road again, but first another great breakfast in the sun in the courtyard. I had to get the bike out of the courtyard up a wobbly ramp into a seriously busy road. I managed this but for some strange reason my nerves and bottle today are totally shot. I am as nervous as hell on the bike, which is weird seeing as I have ridden 45,000km and today my bottle has gone. So I made my way carefully into the Cusco traffic it felt like everyone wanted the piece of road that I happened to be occupying at that moment. I guess that guy’s accident and all the tall stories had got to me so how do I resolve this? So my solution which is a really blokey type resolution. Get aggressive so before you know it I am blaring my horn at anyone and anything that dares comes near me and effing and blinding shouting at all the taxi drivers and bus drivers that seem to be driving aimlessly all over the road. Not that this has any effect on there driving but makes me feel better and slowly my confidents returns and before you know it I am clear of Cusco back in the mountains back in the groove as there is less traffic once you clear city limits.

Love it outside of the towns and cities!

Destination is Puno its gorgeous except it decides to rain again on and off so on with the wet weather gear and warm gloves on as I have some seriously high passes to get over. A great ride even in the wet scenery is stunning even though sometimes I had no feeling in my fingers from the cold. I finally hit a town called Juliaca, one word to describe this place “shit-hole”. It was awful and the roads the worst I have seen on this trip it was like driving on the surface of mars the whole ring road (I am guessing this is a ring road) had been dug up and then left. Huge potholes and as it had raining so the potholes full of water so huge puddles of which you had no idea how deep they where so I tried to go round them but this was not always possible and this would be just about manageable on your own but as this was a town your loony motor taxi’s and crap bus and taxi driver’s all trying to weave there way through this mayhem throw in all the pedestrian’s into the mix and I must say this was my worst experience of the trip so far and I made myself a promise that I would not come back this way. A short run into Puno which was not much prettier than Juliaca so I am already not liking it I was expecting a nice town on the shores of lake Titicaca not this brown blot on the landscape. I found the hotel I was looking for and checked in the usual hassle with the Internet (not working) and then I went for a walk to see if I could find the positive in this town. I walked down to the lake where they’re where 100’s of tour boats for the trips to the various reed islands. I am in tourist hell mmm not looking good so go for some dinner and back to my room where there is a note from Alex and Andrea who are in town to but I missed them for dinner I will try and touch base with them in the morning. 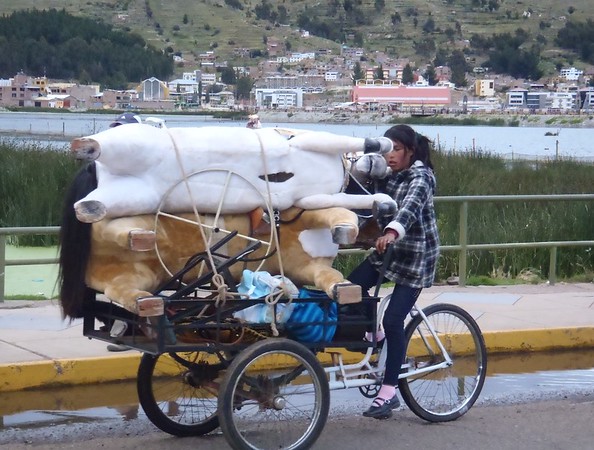 My idea of tourist hell these boats full of folks gawping at other folks!

So its decision time do I do one of those tours and go and see those floating reed islands or do I head for Arequipa and get my tyres sorted. Easy decision really I had no desire to go on mass organised boat trip to gawp at some folk living an alternate lifestyle that was probably practical originally but my guess is that now its purely for the tourist $  so I am heading back into the mountains I may regret this decisions but I did not fancy being a tourist for the day. Another decision I need to make is whether or not to go to Bolivia or not and that means coming back via Lake Titicaca or figuring out another route. A & A are in town as there is a Bolivian Consulate here and they need a visa so if successful they are going through Bolivia me I will decide in Arequipa once I have sorted me tyres.

Does my bum look big in this!

I sort of met A & A on the street as they had popped by earlier but I was in the shower so I missed them again. This time they where busy running up and down the street getting photos and photocopies for there Visa for Bolivia so I had a quick chat and a promise to meet up with them further down the road when I finally figure out which route I am taking but as South America gets thin at the bottom are paths will converge again I hope so they are good travelling companions. I was just about to pull the bike out of the garage and its starts to pour with rain. So I go for breakfast and I am hoping that it will be dry in 30 minutes. Nice Café good simple breakfast and for entertainment I see first Andrea running down the street and later Alex in the other direction trying not to get wet trying to sort the multiple documents needed for there visas.

So another attempt to get out of Puno its is sort of dry I am heading to Arequipa so it is back into the mountains my favourite type of scenery. Remember my promise yesterday about Juliaca well before I knew it I was back there! There was supposed to be a turnoff according to the map but I guess I missed it and my good friend the GPS was not playing at all well this morning as according to her Arequipa is 1,200km and the shortest route is via Bolivia and Chile! How can a machine be so infuriating its 300km in the other direction you useless piece of shit!!

So here I was back in my favourite shithole and there was no way I was going on that same road as yesterday even though that is where the GPS was now sending me yes she had decided to sort of work again and was now giving me more reasonable routes to Arequipa. So I ignored the GPS and went straight through the heart of Juliaca roads reasonable traffic chaotic but anything was better than that ring road.

Back in the mountains and beautiful run to Arequipa quite simply breath taking it was cold due to the altitude as I was above 4,000 meters most of the day but dry with the odd shower just to keep you on your toes. I love the Andes 🙂

I got to Arequipa in good time and I had an address for a Hostel in my GPS and it still took me an hour to find it due to the one way systems and my GPS sending me round and round in ever decreasing circles I  finally resorted to intuition and asking for directions screw technology.

I checked in and I had a huge room with 3 beds all for me and it was reasonably cheap so I had to ask 3 times about the price as it did not seem right for what I was getting.

I went on the Internet to try and figure where I needed to be to get my tyres and it turned out that the Hotel of Peru motors was only 1km away so I walked up there to organise the logistics for the tyres. I talked to Lars on the phone and the plan was to be there at 10am next day and work from there so that was easy and sorted so I walked back to take a look at the town which looks nice and a vast improvement on Puno so I grabbed some dinner (Burger King first time this trip which is surprising as it was quite tasty!) I walked some more and then back to the hostel working on this blog.

I have been trying to upload 100’s of photos onto SmugMug for past couple of days, as I had no Internet in Machu Picchu crap Internet in Cusco and for the past couple of days intermittent Internet so I am nearly caught up. Problem is I cannot update blog until pictures are loaded as they are linked so one of the reason blog running behind and that the story that I am sticking to 🙂