Guess I am in the Amazon!

I had sort of arranged to meet Alex and Andrea, Joop and Fred for Christmas and the place was to be Cuenca. The problem was I had forgotten what day it was and thought I had an extra day to get there but nope it was going to be a one-day dash this should be doable especially with my navigations skills! I got out of Quito no problems thanks to my updated GPS maps that actually seem to work which was very strange for me as it has been a while since I had a clue to where I was 🙂

Nice run and the plan was to have a late breakfast early lunch in Riobamba as it is supposed to be a nice place. I did not like Riobamba that much so I drove straight through it and hit recalculate button on the GPS and I followed the instructions out of town through some little villages nice roads but I am not sure I am going in the right direction but I had new found faith in my GPS and surely it would not let me down and the road was great so I kept on going. Then it did it usual trick of turn left in 100 meters but there was no left turn! So kept going then it started telling me to do a U turn that I eventually I did and went back to the spot where the left turn was supposed to be. Yes there it was hidden behind the bushes was a dirt track leading into the mountains. Bugger if I am going down there check my Garmin settings to see if dirt track had been disabled and they had so Mr Garmin think this is a road. So I did what I always do in this situation I am not going to go back to Riobamba as I had done 50km already and so I just kept on going on this  road that was actually quite nice. 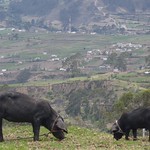 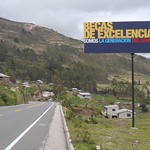 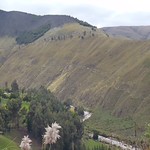 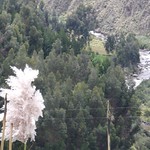 The signs where saying that this road was going to Macas and on my GPS it sort of looked like it was going in the right direction but I had forgotten that there are huge mountain ranges here with very few joining roads but onwards and forwards and at this point I had settled on the fact that I was no longer going to Cuenca but to Macas so lets have a look in the book and see where it is and if there is anywhere to stay.

Well it turns out its in the Amazon! So after driving through the Sangay National Park on a beautiful road cold and wet but very enjoyable it got down to 11 degrees at one stage so I had changed my gloves and put on a jumper for the first time since I am guessing Canada and there where a lot more trees and every so often huge lookout towers with great views when the clouds cleared. This is when I realised I was heading into the Amazon as there where huge signs saying Amazon. Well I was certainly was not planning on coming this way but its rather nice and Macas was going to my new destination for the night. About 25km out of Macas the perfect tarmac turned into a dirt track so it was off-road for the last hour or so and it started getting hot again as I descended into the Amazon cursing my GPS as I bounced down the mountain. I finally hit tarmac and Macas and I started looking for a Hotel the first one nice enough but no WI-FI next one had a swimming pool that I was never going to use but was reasonable enough so I settled in there and went for a wander now it is back up to 30 plus degrees so I had temperature variations of more than 20 degrees and my poor body has not got a clue what is going on 🙂

This evening entertainment is a pizza and watching the locals play volleyball I say volleyball but the net looks a lot higher and there are 3 on each team however its great to watch.

Back to the Hotel and a marathon update of this blog and I also found out that Fred and Joop did not make it to Cuenca because of bike trouble but Alex and Andrea had so plan to join them for Xmas. Yes it Christmas eve but it certainly does not feel like it.

Is it Xmas certainly does not feel like it!

Merry Christmas from the Amazon!

So I guess Santa does not deliver to the Amazon as there was nothing in my sock this morning except a bad smell. I did a Skype call to the folks to wish them a Merry Christmas and its back to the business of travelling to the point of South America. I was going to make a second attempt to get to Cuenca and meet up with Alex and Andrea. I had look at Google maps and there was no direct route I had to go South and double back however according to my GPS there was a more direct route through the mountains. Mmmm who do I believe I will make it up as I go along, as that is what I usually do 🙂 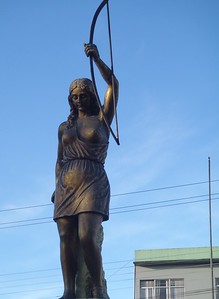 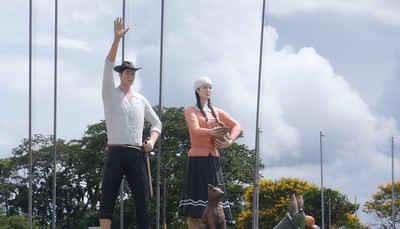 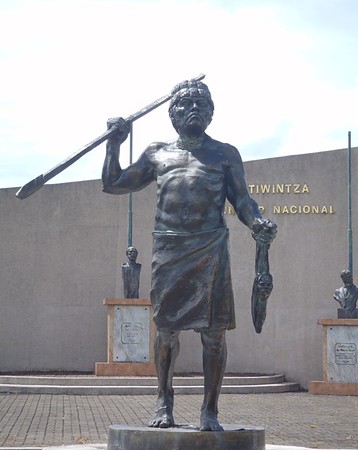 I grabbed some breakfast before I left town, as I did not want to be in the same position I was in yesterday hungry and nowhere for food. Gorgeous winding road through the foothills of the Andes and on the edge of the Amazon hot but okay as long as I kept moving this went on for about 100km I was really enjoying myself confident that its was going to be tarmac all the way to Cuenca. Then Mr Garmin GPS says turn right in 100 meter oh here we go again sharp U turn into a dirt track with a barrier that was open but a sign in Spanish saying Dangerous road enter at own risk. Mmmm another car pulled up next to me and the driver told me that yes this was the road to Cuenca. I ask what is it like his response was not bad and he points at his car saying he can do it in this so in other words I am wuz if I do not at least try. How far I ask is the road not bad response 60km so that 3 times further off road than I did yesterday and a good 2 hours hard slog. Oh well lets go for it, bouncy bounce Merry bloody Xmas of I set at between 20km and 30km an hour odd bits faster taking it easy as the surface was continually changing from hard compact mud to gravel to deep gravel to serious muddy mud up and down hills single track no track and everything in between. Biggest humiliation was being overtaken by the local bus but fortunately I had left my pride at the beginning of the track 🙂 Later on I saw the same bus in the distance and I was even slowly catching up with it and was keeping up with it for a while was I getting better at this off road malarkey nope the road was getting worse and worse yet my pace was not slowing so maybe I do have some talent for the dirt. 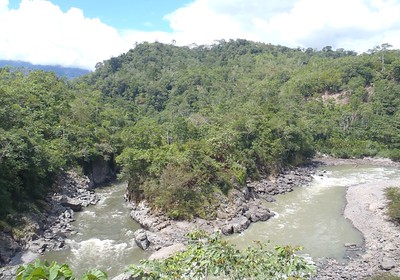 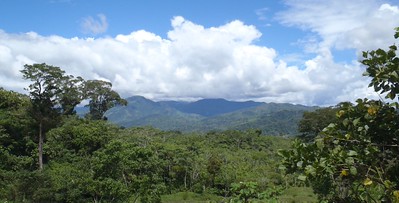 Trying to keep up with the local bus!

To add to my misery (Its not really that bad) I kept getting chased by dogs so here’s is me trying to keep the bike upright through whatever the terrain was kicking out and running along side me snapping at my legs are angry dogs. This is certainly a different way of spending Christmas. Later it got cool and even started to rain a bit making the road a tad more difficult and then after 2 hours plus of full on concentration I finally reached tarmac and an easy run into Cuenca to Hostel that Alex and Andrea where staying at and I was checked in bike parked in the hall and then I went for a quick wander round the town with Andrea before it got dark. That evening another Pizza (Its Xmas and that all that was open that’s my story and I am sticking to it :-)) and we watched a film called taken or kidnapped with Liam Neeson so finally a typical Xmas activity stuffed and watching a  film on the goggle box.

Xmas with Alex and Andrea 🙂

So that was my Xmas how was yours? 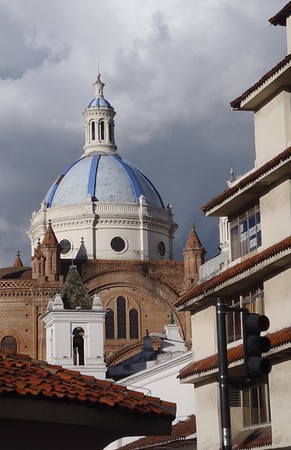