Minors memorial for me Dad!

Day began with left overs for breakfast which is always nice and I was going to ride with A & A to La Esperanza where they would turn left in search of sprockets and chain and I would turn right because I did not want to do the same road again and we would meet up in Ushuaia or before.

It was very windy even in the sheltered campsite so I was a bit concerned how it would be on the open road but as we headed to La Esperanza it was not as bad as I expected but that was mainly due to the fact that we had the wind in our backs for most of the way. When I turned right I was heading straight into the wind and had it on right in my side, which made life for Daisy and me considerably more difficult so fighting with the wind for the rest of the day. Another border crossing the problem today was I could not find the road and my good friend the GPS was playing up as I was only about 30km away but when suddenly it was 130km away Homer Simpson Doh!

Very few photos taken during the day as I was to scared to stop just in case we got blown over by the wind and could not get back upright again! 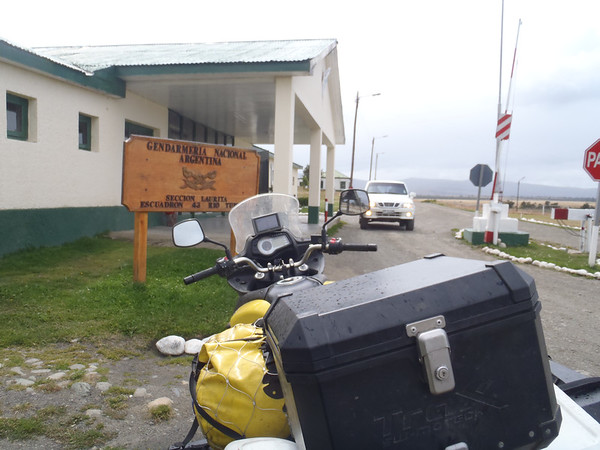 Yet another Border crossing !

I finally find the road, which is not a road but a dirt track, and I find my way to the border. I am the only one there so get out of Argentina easily and another 14km of dirt road very windy and a bit of rain just to try and finish me of completely and I am trying to find somewhere where Daisy will not get blown over and I am going through Chilean customs. No one there either so chatting with the customs guys who are telling me that the winds have been gusting up to 100km an hour and idiot boy was out in that will he ever learn. You may have noticed that not many pictures have been taken today that is because my official photographer has gone of the other direction and that I was to shit scared to stop just in case Daisy and I got blown over in the middle of nowhere on me own and that I would not be able to get her upright due to the wind. So I was not surprised to hear about the strength of the wind, as the evidence of this was in me underpants! As I been kacking myself for most of the afternoon. So back in Chile again a short run to Puerto Natales and to the Hostel I had the name of and i checked in and did my usual wander around the town or today I was blown around town as the wind was still quite strong then to a short presentation on the national park of Torres del Paine which looked great but I had a date with the bottom of the world so no time for distractions as I am getting closer and closer to my goal.

I went for a nice Pizza where there was one long table that you joined and I was sitting and chatting to a nice German couple who had been traveling for 2 years and doing South America by bicycle and had also been defeated by the wind today. I like this set up as it is sometime difficult to talk to folks strangers whilst on the road especially for a shy bloke like me 🙂

Back to the Hostel and the never-ending chore of updating this blog and it is like the wind relentless!

Odd bit of wildlife occasionally to spice things up!

It was still wet when I got up and was I glad to get out of that hole after a cold shower in a filthy bathroom I packed up and hit the road. Dullsville again heading for a place called Resistencia as I had read that there are thousands of art sculptures dotted all over the city and we all know Phillys likes his sculptures.

I rolled into town at about 3pm it had been trying to rain all day but not enough to need waterproofs on but just as I reached the hotel I had the address of it started pissing down. Hotel not cheap but it was wet and I was bored so decided to take the room anyhow and it had safe parking and was quite central and remember I am no longer a traveller but I am now on me holidays!

It rained for the rest of the day but I did venture out trying to dodge the rain. Looking for an Internet Café as the Hotel did not have Wi-Fi it was a Sunday and wet one at that so very little open or very few folks around and I could not find anything open that had Wi-Fi so ended up in a café at a Shell petrol station and I am still there figuring out how to get home!

Resistencia Art Sculptures in the rain and rubbish different!

I did not fancy eating out so I went to the supermarket looking for empanadas I came out with a packet of crisps, some Oreo’s, a Swiss roll (well I thought it was it turned to be just the dough!) and some energy bars and I returned to the hotel room with my feast and watched Avatar the film which I had got from Alex months ago but I never had time to watch. Pretty crap movie plot wise but the effects and scenery nice much better than what I have been seeing the last couple of days.

I think I need to go home and soon but how and when?