Middle of no where !

Shorter run today the wind is not as strong as yesterday but still blowing reasonably hard so I could stop every now and again but I had to pick my spot carefully out of the wind somehow to avoid me and Daisy ending up on our arses. Scenery is bleak and desolates both negative words but it has something special about it where bleak and desolate actually is very interesting and nice to be travelling through. I rolled into town or was that blown into town and found somewhere to stay I have been on a good roll recently and todays was no different. I got chatting to a chap called James who had been there for a month waiting for some spare parts (bearings) for a BMW he had left in Ushuaia and he had been on the road for 2 years in the Americas making my trip seem rather quick. The problem in Argentina is that you cannot import any foreign goods everything must be a manufactured in Argentina (assembled!) so that is why he was trying to get this done in Chile rather than Argentina. I do hope Alex made the right decision on going to Rio Gallegos, as it may be easier for parts in Chile.

I went for a wander round town and grabbed some food in a great interesting sandwich place huge meat sandwich no idea what I ordered and I was none the wiser when it arrived but it hit the spot.

That evening my computer or rather my computer power cable finally died so I am no longer able to charge my laptop as the connector to the computer which had been on the blink since Santiago finally gave up so tomorrows plan of getting the longer ferry to Tierra Del Fuego at 9am in the morning was shot and a new plan to go to a Tax free Zone just outside town to see if I can find a replacement cable! As I will be completely dead in the water without me PC, Daisy and my PC are my prize processions whilst on the road at the moment and I have no idea what I would do if either of them broke so I need to get the PC working as priority number one or maybe it is  just that I did not want to do an early start and the shorter ferry route with regular ferries is an easier route down south we will never no.

I got the PC fully charged by using someone else is cable (thanks James) so I had a good couple of hours left in the old girl if I was not successful in sourcing a new power cable.

Another victim of the Wind!

So todays mission was to source a new power cable for my computer so I pack the bike and head to the Zona Franca. It is dull and overcast and threatening to rain and it is not that warm but it is only about 7km to the tax free zone. I fail miserably on getting a cable and the people I am dealing with are all miserable and unhelpful but I do get a lead (no pun intended) of an electrical shop back in town so I head back there and in town the people were friendly and helpful they did not have a cable but they pointed me in the direction of someone who maybe able to help so off I went to the next shop again nice bloke does not have one but he will ring a friend and he maybe able to help you. Friend says come on over and he can see what he can do so I had been going from pillar to post and was not that optimistic but it turned out friend had a half an old apple cable and it was the half we needed so after doing some final checks on the old one he asks me can we cut the old cable and splice in the new 2nd hand adaptor I say in for a penny in for a pound in Spanish of course and we cut the old cable and splice in the new old connector shrink wrap it all and hey presto its fixed and that will be 30USD. A bit expensive but a new one would have cost me 80USD so I am happy to pay the man and happier still I had power for my PC as I realise how important it is to me on this trip.

So it’s about 1pm so the next question is should I stay in Punta Arenas another night or should I head to Tierra del Fuego I am not sure if it was wise as I had no idea how long it was to get there and if I would be able to find any affordable accommodation when I needed it but I thought bugger I am nearly there so I must keep moving South.

Hit the road and it was cold damp overcast and the wind was getting up but other than that nice ride only difficult when you stopped so very few photos.

Half way there I passed Alex and Andrea who was heading to Punta Arenas for a new tyre so we pulled over for a quick chat but not for long as it was just to difficult due to the wind I will see them in a couple of days in Ushuaia.

Huge queue for the ferry but I drive straight to the front of this as allegedly that is what we motorcyclist are allowed to do and I parked in front of huge truck out the wind so that Daisy would not get blown over as it was still blowing a gale. A bit of a wait for the ferry and I had to stay with Daisy for the whole trip as well as it was a bit rough and she was not tied down so I was worried she may topple over.

Jumped the queue sheltering from the wind

In the final stretch now it’s about 5pm ish there is 30km left of tarmac before the road turns to dirt for the next 130km and there is a small town where I am hoping there is fuel and somewhere to stay. 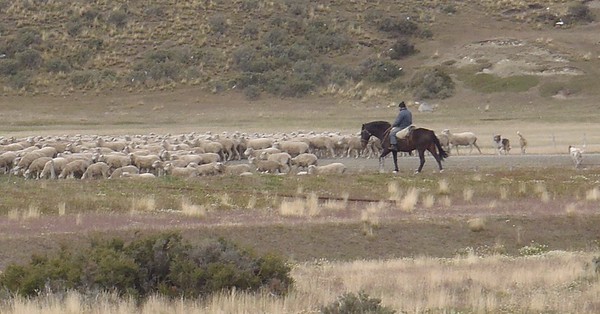 Fuel no problem and I see a sign for a hostel down a dirt road so I follow this and there I meet Jose working on his car outside a wooden building that looks like workers quarters and that is the hostel and it is workers quarters with communal bathroom and rest area and its empty and cheap so lucky me has landed on my feet I have a room to myself well practically the whole hostel to myself with a dodgy heater which will probably asphyxiate me during the night but at least I will die warm.

Guessing that this little place is linked to oil industry!

So after settling in I go for an explore of this one horse town which is a service town I think for the local oil development in the area and it is deserted but it has a certain charm. I am looking for food I find a supermarket but no café or restaurant but I have been told there is one. I walk into a works Mess Restaurant but it is not open for the public but they give me directions to a café which I still cannot find even though a nice chap took me practically to the door so ask again at the Supermarket and the nice lady takes me to a door which is the entrance to the café you could not tell this from the outside. It is the local social club and it is deserted except for a young girl watching a Harry Potter film in Spanish. They are open and I have a great feed and use up the last of my Chilean money and have just enough left for my room and my breakfast in the morning.

Back to the hostel when I realise I have left my glasses at the café so it is back out into town again and then sitting in the common area working this on my own as the place is deserted. Later went out and had chat with Jose who was still working on his car I saw an otter and I must say my Spanish is getting a little better day by day but I only have the vocabulary for a simple dialog but its much better than when I first started.

View from room not bad!