Nice run through the escarpment.

I am heading inland today and I am heading in the direction of Lages on the Ruta138 Serra do Rio do Rastro. Jake in Sao Paulo told me about this road and I had read about it on some others folk’s blogs so I was looking forward to an interesting run. So a slow breakfast quick ride along the coast and then a right turn heading for the hills. Its been a while since my GPS and Mr Garmin sent me into the unknown today it decided that Phillys needed to do some dirt roads even though we have had this discussion on numerous occasion that Phillys and Daisy prefer tarmac and has disabled off roads in his choices menu and yet I still keep finding myself in the middle of nowhere on a dirt road and today was no different. A good day in the saddle even with the addition of the odd off road excursions lovely countryside and a run on a gorgeous road through and up and over the escarpment that runs along the coast of Brazil.

I stopped and tried to get some information about Lages at a tourist info place but my Portuguese is non existent and the lady there only spoke Portuguese so with my bad Spanish I managed to get a new destination of Urubici as it got a thumbs up from the lady which I took as a sign that it may be nice. I rolled into Urubici at about 3pm looking for somewhere to stay but all the places I had a look at were very expensive. One I thought had potential and I thought the guy said 30 Real’s which was around my budget he spoke Portuguese only with a speech impediment making the dialog a tad difficult! It turned out it was 300 Real’s not 30 Real’s you are taking the piss mate it’s a Pousada not the bleeding Hilton. Obrigado mate and ciao. I found a nice Pousada, which was within my budget just as it was starting to chuck it down. It rained for a while so I worked on this and the sun came out again so I went for a walk trying to find something nice for my dinner.

I walked for miles again and I found an Italian restaurant just as I was going to resort back to the standard fare so a nice Spaghetti tonight which is just what the doctor ordered. Back to the Pousada chatting to the owner who gives me some top tips and pointers for my route back to the coast tomorrow and I had found another route on Advrider and he added some extras to it and showed me some pictures of this so I am really looking forward to tomorrows ride.

Wild life not so wild!

Drop dead gorgeous the scenery not the fella blocking the view in this piccie.

What a glorious day I was driving along and I found myself shouting and screaming at the top of my voice was he angry and pissed off with some local driver again nope it was just pure happiness I was also giggling like a school girl as I was riding along. Why this sudden show of emotion well its the scenery I was riding through which was drop dead gorgeous and stunning and simply breath taking and the sun was shining not to hot and I was whizzing along a road that I knew was a dead end but hey what a dead end 🙂 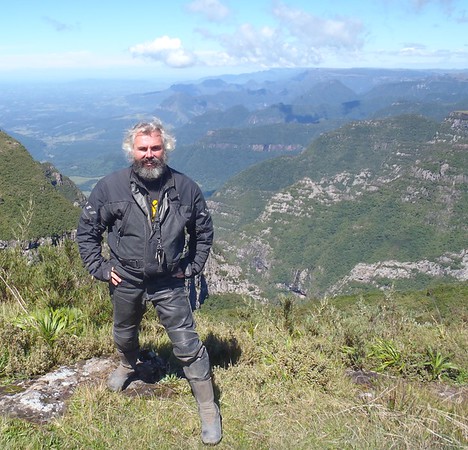 So I had yet another leisurely breakfast I seem to be doing this a lot lately in my real life I never really bothered with breakfast just a coffee and a current bun on the run well me thinks I going to start implementing leisurely breakfast on a daily basis as I am enjoying them. Mandatory photo shoot, as lady at the pousada wants a picture of Daisy and me (Life of a minor celebrity is a tough one I can tell you :-))

Mandatory photo shot for the owners of Pousada Prof Verde

I hit the road and as I already mentioned the sun was shining but it was only 19 degrees C, which is a nice temperature, I filled up Daisy as I was heading into uncharted territory with few fuel stations and first port of call was to a nice little waterfall and shrine called Gruta N.S De Lourdes which was pleasant then onto the dead end road to Morro Da Igreja Pedra Furada which as I mentioned earlier was pretty special. I spent some time here just soaking up the wonderful scenery and wow was it spectacular. 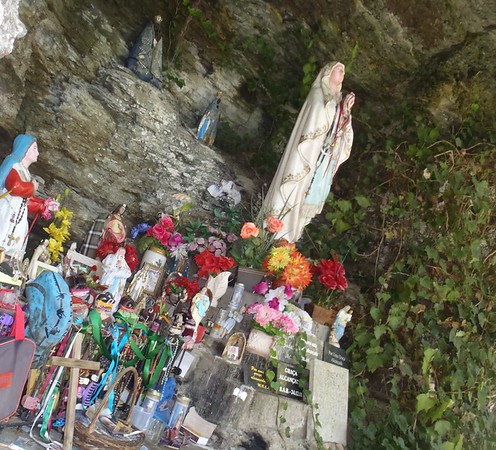 I hit the road again heading to Serra Do Corvo Branco which was a canyon that cut through the rock and a sharp descent on a dirt road down the through the escarpment I have mentioned before. Yes yet another Dirt road but this time I knew it was coming and it was planned for not a surprise like previous days. 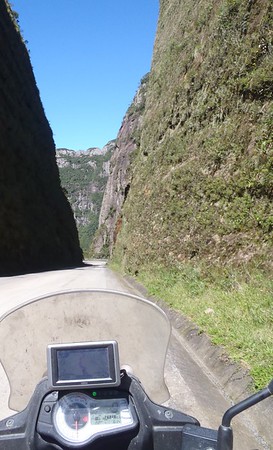 Another splendid run and wonderful scenery the only blot on the landscape was as I was riding along I felt something hit me in the face just below my eye because as usual I was riding with my helmet open enjoying the wind in me face. So this is an usual occurrence being hit in the face by flies but this was different it was bigger and hurt like hell and just to rub salt in the wound it stung me I guess it was a bee that I had just head butted and in retaliation it had stung me. Ouch that hurts I have been stung about 4 or 5 times by bees on this trip usually on my arms as they fly up my sleeves and cannot get them out so they end up stinging me on the arms this time on the cheek bone and boy did it hurt it felt like someone had just punched me in the face.

So the lesson here is to ride with helmet closed and the visor down. Bollocks to that I love riding with my mush in the open so I am going to continue doing this and suffer the consequences, 20 minutes later get hit right in the eye by a fly 🙂

So lots of dirt roads today so I am not making much progress but who cares when the scenery is like this heading back to the coast to a place called Torres again as is much of the planning at the moment based on no real knowledge of the places I am going only that I like the name and the sound of the place.

After another tougher unplanned off road stint I rolled into town and straight to the tourist info place to find a cheap place for the night and I was directed to a nice Pousada round the corner run by a nice elderly couple I have a laugh with them whilst checking in and then for my mandatory wander around the town looking for something for my dinner and again the scarcity of viable options and I end up with a chicken crepe on a stick!

Back to the Pousada working on the thankless task that is phillysbigtrip.wordpress.com I will be happy when I no longer am obliged to do this, as it is becoming quite a chore. So some last minute feedback and appreciation of my efforts here would be nice even if it is just a smiley face and or thumbs up. Daisy needs some love 🙂