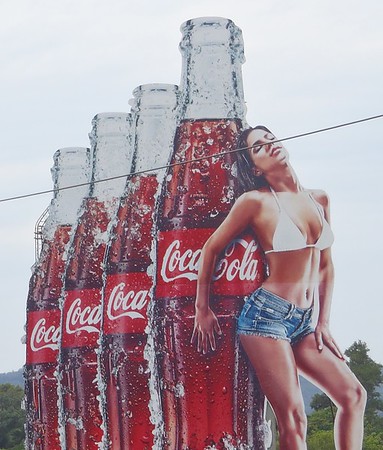 Makes you want one!

A hot shower this morning strange the cheaper the place sometimes the facilities are so much better not a bad breakfast either. Time to load Daisy and the street is completely different than yesterday when its was dead today it was chocker block with folks and Daisy is parked at a bus stop so surrounded by folks waiting for buses getting on and off busses that seemed to come every minute so basically Daisy was blocking a very busy thoroughfare Ooops.

So I packed her very quickly as she was in the way of everyone trying to get to work I did not fettle with the chain as there was no space and I hit the rush hour of a Capital city and it has been a while since I was in heavy traffic and it was quite chaotic. Looking for bikes shops as I head out of the city and I spot a Honda dealer and stop and enquire about chains. It amazes me how little the folks in these shop know about what they are selling a chain is a chain it does not matter what type of bike it goes on if you have the specs and I do it’s an O ring 525 chain with 118 links but the chap there is not sure as a Honda dealer that the chains they have would fit a Suzuki but he will investigate. He comes back some time later and tells me that a Honda Atlas has a 525 chain and 118 link really fascinating but do you have one. No!

I am not having a dig at these guys as they were trying so hard to help me they called some guys in town to see if they had one in stock and it was hard to get away as they where determined they where going to get me a chain so I appreciate the effort put in in it was entertaining but also very time consuming. One guy rang his mate who had V-strom and seemingly he got his spares from Amazon.com which is good to know! I finally managed to get away thanking my new friends for there effort and I head back to the road out of town and I try a couple more shops one will only work on bikes that he sells and an other had one but it only had 114 links but we could butcher another one for the 4 extra links not the solution I was looking for and surprisingly this last dialog all done in German! So I decide that Paraguay is not the place for chains lets wait till we get to Brazil and see if I can score one there. It’s about 12.30am and I still not left Asuncion and I still need to get Iguazu and a border crossing so I better hurry up.

It felt like I was driving through town for age’s loads of traffic and stopping and starting and when I did leave town it was never for very long before and you where passing through another town or village with speed humps chaotic traffic and traffic lights. I have been away in unpopulated areas for to long and I am not enjoying this much its dull and overcast and threatening to rain as well and it finally does so waterproofs out andI need to be very careful as the road are very muddy.

took very few photos today not really in the mood and scenery not that photogenic.

I finally reach Ciudad del Este and realize the route that Mr GPS is sending is via Brazil and there no way I want to go through Brazil and add another border crossing to my day as its already quite late. So I am certain that there has to be a way into Argentina without going via Brazil (does this sound familiar) I am stuck in rush hour traffic just before the border when I have this realisation so I turn right and I figure out that if I follow the river I should hit the border with Argentina soon why Mr GPS is not being cooperative I do not know why. I ask some Motorbike taxis and they send me to a place called tres fronteres which sound promising and I ask a police man and he says yes there is a border crossing but its closed but its down there. Well he was right it’s a ferry to Argentina and the last one is 16.30pm its 17.30pm I talk to the Army guys at the ferry about next border crossing into Argentina and that’s about 200km away as there are no bridges across the river till then. I am about 5km away from the Hotel where A & A are staying but have to go back 20km and then go in via Brazil and this I was not expecting. Sheepishly I follow the instruction of Mr GPS who was right this time and I really should do my homework on Border crossing I am expecting a lot more than there is in reality. Huge queues crossing the bridge into Brazil but its moving I nearly miss Paraguay immigration and Aduana as I cannot see them for the lorries but I know they are there so pull over and I am just past them. Check out easy peasy next stop Brazil. Tell the guys I am going straight through to Argentina so they say just do immigration for me and there is no need for a temporary import for the bike so that was easy as well. 20km ride through Brazil, which looks very civilised in comparison to Paraguay high tech traffic lights, which count down and up for every light change which is quite mesmerising.

Final border immigration for me simple chat with Aduana and they say if I am only going into Puerto Iguazu and going directly back to Brazil no need to import the bike into Argentina. It sounds dodgy but its late and getting dark so accept this and head to the Hotel to meet up with A & A.

Rolled into Argentina just as it was getting dark.

I roll up to the Hotel just as its getting dark A & A are there and seem happy to see me 🙂 so shall I stay at this place or try and find a hostel as its quite expensive but I am knackered and I really do not like the creepy guy running the place but after some negotiations I get the price down to a more acceptable level by agreeing a 3 night deal and I have a huge room with a double bed and 3 single bed as well so have 4 beds to choose from to sleep into tonight nice.

I am totally done in after my long day I just had and and so where A & A as they been out and about all day as well so we spent the evening just hanging in there room chatting and catching up and swapping tall stories no dinner only chocolate biscuits which was all I needed. A very pleasant evening I am going to miss you guys and it was nice that you where always in the vicinity so when I needed company or a pick me up a quick E-mail and a rendezvous was quickly sorted 🙂