So a short day planned today to Cafayate, which is about 120km away the sun, is out and it is clear as bell so it is absolutely stunning compared with yesterday. Good relaxing breakfast slowly packed Daisy and hit then road stopping every 5 minutes to take photographs as it was a beautiful ride so maybe not such a bad idea to come up here after all. 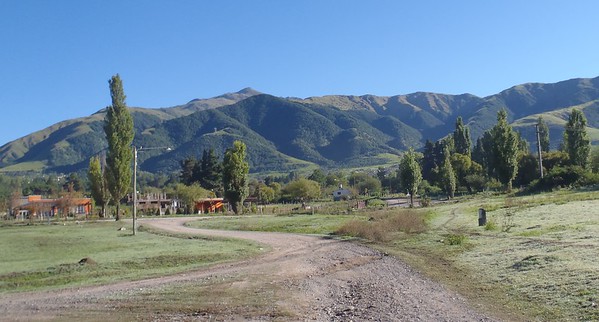 Road from Tafi to Cafayate nice

I got to Cafayate in a couple of hours it was hot so I needed to get out of my bike gear ASAP and I found a nice little hostel of the main square next to a posh hotels who’s car park I could use for Daisy. Off exploring the town which is also very small and compact I head to the tourist info place for a map and ask if there are any walks yes there was up a hill to a shrine so that is the plan so I keep walking up hills to these religious spots its like I am doing some kind of pilgrimage or it is just that the religious folks have nicked all the good spots for crosses and shrines. A lot harder walk this time as its 30 degrees plus and no clouds cover so hot and sweaty but I make it.

View from the hill.

It is in private ground but I am told I am allowed to go in but when I try to get out the gate has been locked save for a small gap which tubby here could not fit through. Oh bugger no one around and I am locked behind this huge fence with sharp objects on top so climbing over not really an option, as I am not as limber as I used to be. I finally get the attention of someone and I am free. I head back to town and see a gym with some guys playing a game similar to squash but the court the size of a basketball court and four guys playing at the same time in teams of two. I sat and watched this for a while still could not figure out the rules but very entertaining it would be interesting to know what it was that they where playing and then back to the hostel.

I went out again for some dinner and some more exploring and I saw some lions! Seemingly the circus is in town and they still use live animals here and they where driving them around the square on the back of an articulated lorry not very HSE compliant in my view!

I had a pizza from a takeaway joint that had seats on the street then I crossed to the other side of the street for an ice-cream so a very pleasant meal. Back at the hostel there was a BBQ Argentinean style with a huge amount of meat and I was asked if I would like to join them for dinner. I was already stuffed but it would be rude not to so another feed of big chunks of meat and sausages lekker! No one spoke English so another evening with my limited Spanish but very enjoyable another late night.

Peel me a grape!