Woke up ready for a nice hot shower but bugger shower did not work only a dibble of cold water. After a while I realised that there was no electricity so hence the cold shower so I went out to speak to the young lad I haggled with yesterday over the price turns out no electricity in town there is a power cut. I am sure he knew about it but failed to tell me so now a cold shower and no Internet and I wanted to do some research oh well cold showers are good for you brrr.

Not sure why this town had been recommended perhaps it was for the mountains around the place which I could not see because of the clouds or because of the national park nearby so I decided to head into the park to find out. Today was also cool and cloudy and threatening to rain and when I turned on to the road to the park this was a dirt road and I thought if it rains this is going to turn to mud and slush very quickly and the mountains where under a cloud so I decided against going any further turned round and started making tracks for a brewery that both Chris and Geraldo had recommended that had rooms available as well.

It was a strange day for the first hour the road was a terrible potholes everywhere so spent all morning avoiding them. It was a bit like a computer game trying to find a way through them this was not so bad when it was dry but again it began to drizzle so swerving and changing line quickly not advisable as the roads very greasy. Then there was an excellent bit of tarmac with less potholes and it was dry again whizzing along enjoying my self when I noticed up the road over a brow of hill a dirt track so I slowed down which was fortunate as this dirt track was the road so from excellent tarmac to dirt road in a split second. You have to keep your wits about you travelling through here. So a dirt road for the next 15km with different levels of difficulty that kept me focussed. I had not had breakfast as I was still stuffed from the huge Chinese I had last night and it was nearly lunch time so when I finally made it to La Esperanza I was ready for lunch and just on the outskirts of town I found a nice little café that did Crepes excellent just what I fancied.

So a relaxing lunch after my motocross excursion and then back on the road to the Brewery. It was cold and wetter in the afternoon greasy roads and at some stages zero visibility as I was driving through the clouds sometimes. I thought it would be hot and sweaty here but its been cool and wet for the last 3 days I am not sure what I prefer but I would like to be able to see more of the country but most of it seems to be covered by clouds. It took me while to find the place but I did and it is very nice it is to debating on whether or not to stay another night, as it is cheap and the surrounding area looks pretty interesting. I will decide in the morning.

On this trip I have not come across many long distance motorcyclist tonight there are 3 others staying at this place so just like buses see none for ages and 3 turn up at the same time and 2 of them are going on the same boat as me to Colombia.

Birdie with same colour palette as me 🙂

I woke up snug as bug as I actually had a blanket and a tee shirt on as it was nippy here and it sounded like it was raining outside so I rolled over and went back to sleep decision made I am staying another night. I eventually got up and had a leisurely breakfast and I finally went for a walk to Los Naranjos Eco-Archaeological Park which took a couple of hours a pleasant walk through the jungle to the lake where there was a long raised boardwalk along the lake. Loads of birds and stunning scenery and it was dull and overcast and sort of drizzling so not to hot. The surrounding mountains covered by clouds so I am not getting the full vista. I am in two minds on whether the weather is bothering me as I am not a big fan on full on sun and heat but I would like to see a bit more than just the glorious glimpses I have been getting to see whilst in Honduras but it is pleasant riding in this weather when its dry dam right scary when wet!

I got back to the brewery at about 3pm and I treated myself to a piece of chocolate cake and a vanilla cream soda mmm lekker. The place is a brewery that I am staying at http://www.ddbrewery.com but as I am still on the wagon I have not tried any of the beer but no problem as they also make there own soft drinks, so orangeade, coke, vanilla cream soda and Root Beer. My favourites cream soda and the Root Beer and the food is not bad either.

Whilst enjoying my afternoon tea a Canadian Girl Jill arrived and was going for a walk to Finca Paradise Coffee Plantation just up the road and I still had some miles in me so I decided to join her, as did another young American lad. Another great walk but extremely muddy and slippery we picked up a guide a young Honduran school lad who offered to show us around as a guide we politely declined his offer but he was bored so joined us anyhow running ahead pointing things out. Excellent practise for my Spanish and another good walk.

Guide and victim to practice my bad spanish with 🙂

Got back to the brewery just as it was getting dark and went back to my room to look for some good reading matter for my kindle for the coming months and I ended up downloading 29 books all old classics so it cost nothing so I have plenty choices now but if anyone has any good book suggestions let me know and yes I maybe willing to pay Amazon if they look good. I am nearly through the Hunger Games Trilogy then I think I will go swashbuckling with Alexander Dumas and the musketeers.

I had dinner with a group of folks staying at the Brewery and then a reasonably early night updating this well sort of and an evening reading my Kindle.

Nice relaxing day with a lot of walking very pleasant 🙂

It is Saturday already I have somehow lost a day somewhere meaning I will hit the Nicaraguan border on a Sundays and Sunday is also the day of the local elections here so I hope the border is open. Plan todays was to get up reasonably early and go to the Pulhapanzak Waterfall and then head for the border town of Danli. So that’s the plan but I did not get up till 10am ish as I could not see my watch in my room as it was dark in there. So a leisurely breakfast so I did not hit the road till about 11.30am maybe I will skip the falls as they are not exactly on my way to ensure I get to Danli before it gets dark. As I get to the turnoff I say bollocks and head for the falls anyhow and I will figure out the rest later. I spent a short time at the falls taking pictures then I hit the road. For the first 100km I was backtracking along the route I came in a couple of days ago the difference to day was that it was not raining and I could see some of the scenery this time but still cool and cloudy so vistas slightly spoiled by cloud cover. This is the main road to the capital so in places very good twisty dual carriageway through the mountains but just to keep you on your toes the odd potholes or dirt track for road works and lots slow moving traffic but making reasonable progress and enjoying the ride.

Goodbye and thank you for all the fish.

I have been told not to stay in Honduras capital Tegucigalpa (hands up anyone who knew that was the name of the capital of Honduras) so I passed through pretty quickly lots of traffic and the odd accident and fighting with the locals for my share of the road. Lovely run in to Danli it was about 4.30pm so the light was great but was I was slightly concerned it was going to get dark on me but I hit the town and found a hotel just as the sun was dipping below the horizon. 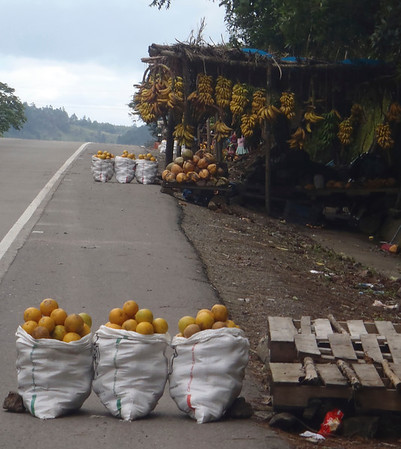 I was joined by a Romanian Couple I had caught up with on the road into Danli but had lost them again due to traffic and roadwork’s and it turns out they are also on the same boat as me to Colombia so that’s 4 fellow passengers I have met already. We went into town to grab something to eat and find ourselves in an interesting café run by a Texan who had landed up it here years ago. Interesting Chap and not bad food spagbol just what I fancied. Alex and Andrea headed back to the hotel and I went for a small wander on my own but not much here or it is the kind of place to be wandering out at night so back to the room and yes this is finally up to date it 9pm so a bit more reading and then beddies byes. No Internet so unable to publish this so you lot will just have to wait for your next dose of Phillys Big Trip. Tomorrow is another border crossing and a new country Nicaragua should be fascinating. Trivia fact on Honduras tomorrow is there elections day so there is no alcohol being sold the day before the day after and the day of the elections I wonder how this effects the voting 🙂